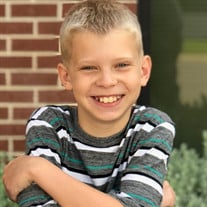 Alexander “Xander” Lee Young of Mansfield Texas left this world to join his Heavenly Father on Monday the 13th of July 2020. He was born on a stormy evening in Arlington Texas on March 31st 2007. He spent the next 7 years living and growing there with his parents and younger sister before moving to Mansfield. Xander attended Boren Elementary where he excelled in all things Math and Science. He loved to sing and was a member of the school choir, the Baritones, during his 3rd and 4th grade year. Xander found his place in this world when he joined the Cub Scouts at the age of 9. It was a natural place for a born leader to be and he loved the camaraderie scouts provided. He went on to Asa Low where he continued learning and picking up new talents. It is there he found his passion for the Trumpet. Xander moved onto Wester where new passions grew. Though he was small he had a fire for football, football was something he always wanted to play. He was also a member of the robotics team. He could talk to you for hours about robots the team was building. Above all else, he had a special place in his heart for babies and looked forward to church on Sundays so he could be with and love on them. He was a true nurturer. Xanders short life was lived well. He was a leader, a fearless scout, football star, math & science whiz, robotics pro, trumpet playing, song singing, baby loving, force of nature. The world is truly a lesser place without him in it. Xander is survived by his loving parents Leia & Chad Young and his sister Lexi, of Mansfield Texas. As well as grandparents Eric & Deborah Washam of Mansfield Texas and Jeffrey & Donna Young of Bedford. As well as a large extended family of great grandparents, aunts, uncles and numerous cousins who all adored him. To All Parents by Edgar Guest "I'll lend you for a little time a child of mine," He said. For you to love the while he lives and mourn when he is dead,It may be six or seven years, or twenty-two or three, But will you, till I call him back, take care of him for me? He'll bring his charms to gladden you, but should his stay be brief, You'll have his lovely memories, as solace for your grief." "I cannot promise he will stay, since all from earth return, But there are lessons taught down there I want this child to learn. I've looked the wide world over in my search for teachers true, And from the throngs that crowd life's lanes I have selected you. Now will you give him all your love, nor think the labor vain, Nor hate me when I come to call to take him back again?" "I fancied that I heard them say: "Dear Lord, Thy will be done! For all the joy Thy child shall bring, the risk of grief we'll run. We'll shelter him with tenderness; we'll love him while we may, And for happiness we've known forever grateful stay. But should the angels call for him much sooner than we'd planned, We'll brave the bitter grief that comes and try to understand." Join Mansfield Funeral Home as we celebrate the life of Xander https://vimeo.com/event/172949

Alexander &#8220;Xander&#8221; Lee Young of Mansfield Texas left this world to join his Heavenly Father on Monday the 13th of July 2020. He was born on a stormy evening in Arlington Texas on March 31st 2007. He spent the next 7 years living... View Obituary & Service Information

The family of Xander Lee Young created this Life Tributes page to make it easy to share your memories.

Send flowers to the Young family.