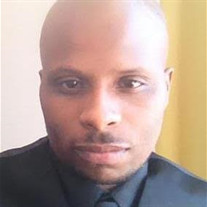 Willie G. Thomas Jr. was born on January 11, 1978 in Dallas, TX to the parentage of Shelbie Thomas and Willie G. Thomas Sr. He was the third child out of seven children and the oldest male child. Willie attended Bryan Adams High School where... View Obituary & Service Information

The family of Willie Thomas Jr. created this Life Tributes page to make it easy to share your memories.

Send flowers to the Thomas family.