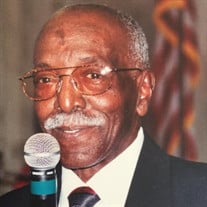 The book of life opened for Willie B. Cross on December 5, 1932 to the mother of Ms. Annie B. English, (who preceded him in death) in Cordele, Georgia. Upon completion of high school, Willie joined the Army of the United States where he served as a Corporal from March 19, 1951 to February 19, 1954. After being honorably discharged, he relocated to California in 1972 where he strived and continued to positively impact the world. On September 23, 1987, Willie was blessed to join in matrimony his beloved wife, Mildred Cross and to this union came 7 Children. The Lord blessed this blended family with two (2) boys and five (5) girls. Willie was a very loving and devoted man who believed in working hard to ensure his responsibilities were well taken care of and that exhibited through his work ethic. Working as a diligent, hard- worker at ACA for over 25 years, Willie developed a love for computers that he carried with him until he was called home. It wasn’t until 2007 that Willie decided to retire from DeVry University of San Fernando where he took great pride in working as a Security Guard for the college campus. Willie was a faithful Christian man who loved serving the Lord. He accepted Christ at an early age and later became a devoted Deacon at Trinity Baptist Church where he served under the leadership of Reverend Bogan until he relocated to Los Angeles, California. He then united with Saint Rest Baptist Church under the leadership of Reverend H. V. Jordan as an Usher until 1998. Following his membership with Saint Rest, Willie became a devoted member of Second Baptist Evangelical Church under the leadership of Bishop William LaRue Dillard and served as one of the Trinity Leaders of the Fathers Council, and was also on the Usher Board. Willie was a dedicated member until he relocated to Arlington, Texas in 2013. Willie was a compassionate Husband, father, grandfather and friend. He was well loved by all of those he held dear to his heart and will forever be appreciated for his contribution in everyone’s lives that loved him dearly. On May 30, 2017, Willie made his heavenly transition. He leaves to cherish his memories of his Darling devoted wife Mildred, 7 children, Byron Cooper, Willie B. Cross Jr ,Vicki Cross, Dawn Riley (Kevin ) ,Terri Owens (Ernie), Yolanda Jackson (Lucious) , and Angela Wright (Jimmie) , 1 adopted Son, Elder Barakt Saleem (Dianne) , 1 God-son, Jonathan Jones Jr and 1 God Daughter, Kamilah Jackson. Brothers: William Battle (Linda), Robert Battlen and adopted brothers Robert Brooks Wilson and Charles Davis (Irish) Sisters: Thelma Jones, Ethel Williams, Eddie Cooper (David) , Juanita Dearman, Dollie Woods (Clifford) , Regina Banks (Fredrick), Yvette Starks (Andre), Ann Gilmore(Charles), 2 adopter sister’s Georgina Joyner (Joe) and Ernestine Dial and a host of grandchildren, great grandchildren, nephews, nieces, relatives and friends. Willie was well liked by many because he was always “loose as a Goose” and will be tremendously missed by all who knew and loved him.

The book of life opened for Willie B. Cross on December 5, 1932 to the mother of Ms. Annie B. English, (who preceded him in death) in Cordele, Georgia. Upon completion of high school, Willie joined the Army of the United States where he served... View Obituary & Service Information

The family of Willie B. Cross Sr created this Life Tributes page to make it easy to share your memories.

Send flowers to the Cross family.