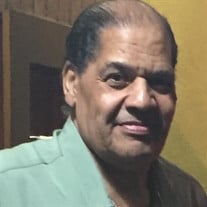 William N. Johnson, Sr., 75, was born to Wilbert Johnson and Lelia (Lewis) Johnson in Camden, New Jersey. He passed away peacefully at home, in Mansfield, Texas, on September 16, 2018 after an intense battle with metastatic malignant melanoma.... View Obituary & Service Information

The family of William Nathaniel Johnson created this Life Tributes page to make it easy to share your memories.

Send flowers to the Johnson family.