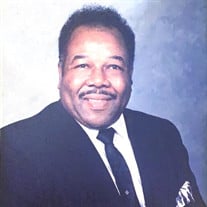 Wesley Charles Kemp Jr. was born on November 29, 1947 in McGregor, TX. He was the son of the late Wesley Sr. and Rosie McCloud Kemp. He was preceded in death by his sister, Barbara Gilbert and brother, Vernon Kemp. He spent his early years in McGregor, TX. He grew up serving at Roberson Chapel AME Church with his family where he gave his life to Christ at an early age. His first job was delivering papers and he was an Eagle Scout in the Boy Scouts. He enjoyed and excelled in academics and sports, attended George Washington Carver and graduated from Mc Gregor High School in 1966. Shortly after graduating, he moved to Ft. Worth, TX and was employed at General Dynamics. He bought his first car and on his road trip to McGregor to show it off, it broke down! He selflessly chose to serve his country by enlisting in the United States Air Force on May 14, 1967 and retired as a Sergeant on May 18, 1971. He was stationed in Thailand when he met the love of his life, Boonthai (Nit) Ruamsilp and they were married in 1970 in McGregor, TX. To this union, one daughter was born, Selena Kemp. He was employed for over 38 years for Lucent Technologies (formerly SW Bell & AT&T). While employed at Lucent, he was transferred from Texas to New York and resided for over 20 years until he retired in 2005. He was working in downtown Manhattan only a few blocks from the Twin Towers when they were hit on 911. He was an active member of Bethel AME Church in Copiague, NY where he served on the Steward Board, Finance Committee, and Male Choir. When he wasn’t serving, Wesley enjoyed working in his beautiful garden, making Chow Chow for family and friends, BBQ’ing, listening to Jazz and Christian music, and he was a diehard fan of the Dallas Cowboys. He loved attending family reunions, taking his Mother to a Broadway show in Manhattan on her first trip to NY, and traveling with his beautiful wife of over 51 years and he collected elephants wherever they went. He relocated to Mansfield, TX where he united with Bethlehem Baptist Church under the leadership of Rev. Michael Evans Sr. He loved whenever his grandkids would come to visit in Texas and have fun excursions with Papa and YaYa. When they misbehaved, all he could do was swing at them with the PaPa stick (back scratcher). During COVID, he thoroughly enjoyed watching his Pastor and church family online until God called him home. He leaves to cherish and honor his memory his loving and devoted wife of 51 years, Boonthai (Nit) Kemp, loving daughter: Selena Kemp (Donavan) of Randallstown, MD, 4 grandchildren: Israel, Sienna, Princeton, and London of Randallstown, MD. 5 sisters: Virda Pyburn, McGregor, TX, Shirley Clark, Ft. Worth, TX, Deborah Stanfield, Oxon Hill, MD, Rohelen Hicks, Mansfield, TX, and Owedia Kemp, Hamilton, TX, aunt: Mrs. Geneva Eastland, Spring Branch, TX, close friends: Ivory Jackson, Charles Graham, Jimmy Gatling and Jerome Jones; and a host of nieces, nephews, cousins, and friends. A very special thanks to Donald Hartsel and all of Wesley’s Thai friends and family.

Wesley Charles Kemp Jr. was born on November 29, 1947 in McGregor, TX. He was the son of the late Wesley Sr. and Rosie McCloud Kemp. He was preceded in death by his sister, Barbara Gilbert and brother, Vernon Kemp. He spent his early years... View Obituary & Service Information

Send flowers to the Kemp family.