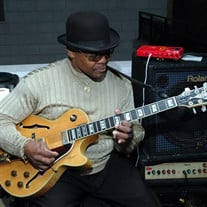 In Memoriam William Marshall Cross Jr., a native of Cleveland Ohio, transitioned from this life on Wednesday, June 17, 2020 in Mansfield, Texas. He was born on March 24, 1950 in Cleveland, Ohio and was the eldest son of the late William Marshall Cross Sr., and, the late Ruth Calhoun Cross Richardson/the late William Richardson. He is universally known as “Wes” in homage to one of the greatest jazz guitarists, Wes Montgomery. Wes, while a passionate student of the bible, simultaneously excelled professionally in two careers - one in Music performance/recording and the other in Systems Engineering at Xerox Corporation. Wes began his music career in 1957 and is a self-taught guitarist. At age 10, Wes recorded his original composition entitled Dianna while performing with his brother and drummer, Thomm Cross, and, the band Chuck and the Tremblers. He was inspired by the late great Wes Montgomery and the early recordings of George Benson. Wes had the distinguished honor to exchange licks with George Benson and has his GB10 guitar setup and autographed by George Benson. Wes was the Touch* and Clyde George is Majik in a dynamic duo, Majik Touch*, composed of the distinguished sound of the organ and guitar combination. Wes had a special ability to play a wide variety of music ranging from Funk, Rock, Blues, and Jazz. Majik Touch* was formed in 1991 in Dallas Texas and Wes has performed concerts and events all over the Dallas Metroplex and surrounding cities. His many accolades include band leader for the late Johnny Taylor and numerous concert tours with The Ohio Players, B.B. King, Bobby Blue Bland, Tyrone Davis, Betty Wright, Millie Jackson, Etta James, The Spinners, The O'Jays, The Temptations, Kirk Whalum, Gladys Knight, The Jackson's and Jesse Jackson's Operation PUSH tour. Quincy Jones was his sponsor in The Tops in Blue US Air Force. He is also in the HBO film "Americas Dream" as guitarist Earl the Pearl. Wes’ Systems Engineering career was fostered during his tenure at Xerox Corporation. Wes provided Engineering leadership in product/program management, infrastructure development, network systems analysis, project management, manufacturing/re-manufacturing engineering and quality assurance. He had a solid track record of building up effective empowered teams while providing quality products and services for high level customer satisfaction. He retired as Manager of Digital Networks Customer Solutions and Customer First after over 20 years of excellent service with Xerox. 2 Timothy 2:15 (KJV) 15 Study to shew thyself approved unto God, a workman that needeth not to be ashamed, rightly dividing the word of truth. The Study of God's Word was so important to Wes. In 2005 Wes made a commitment to God to study the word every day and he honored that commitment. To foster his passion for studying and sharing his knowledge of the Bible, Wes organized an on-line Bible study group every Tuesday evening which has flourished since March 5, 2010. Wes’ Bible Studies were fashioned to help his students and himself steadily become more like Jesus each day. After graduating from Shaw High School in Cleveland, Ohio, Wes joined the United States Air Force. While serving in the United States Air Force he completed the United States Air Force Military School - Flight leader curriculum and the Chanute Technical Training School - Aero-Space curriculum/Deceleration/Ejection-Rantoul, Illinois. He attended Central State University, Xenia, Ohio. Wes Cross is preceded in death by his parents and his younger brother, Gregory Karl Richardson. Wes leaves to cherish his memory, three (3) brothers Thomm Cross (Karen) of Euless, Texas, Larry Cross (Janice) of Sacramento, California, Derrick Cross of Chicago, Illinois; sisters Roselyn Richardson Reese (Clarence) of Plano, Texas, Lynn Jacobs, of Cleveland, Ohio, Sondra Bryant of Akron, Ohio, Tiajuana Richardson and Valencia Owens (Terry) of Cleveland, Ohio; a host of nieces, nephews, Godchildren, close relatives and friends including Cristopher Williams and devoted companion and special loved one, Deborah Williams. Wes lives with us spiritually. He will always be near and dear to our hearts - his wonderful qualities - his style, his swagger, his strong will, his God given musical talent, his good spirit, his kind and caring nature and love of God and family and friends will live on in our memories. Look for signals of his presence, such as the music he loved. His favorite bible verses. Celebrate and honor these moments. Due to the COVID-19 pandemic, service will be private for the immediate family. A memorial service will be scheduled on a future date. In lieu of flowers, the family ask that you keep the memory of Wes alive by supporting the Sarcoidosis Foundation of Texas.

In Memoriam William Marshall Cross Jr., a native of Cleveland Ohio, transitioned from this life on Wednesday, June 17, 2020 in Mansfield, Texas. He was born on March 24, 1950 in Cleveland, Ohio and was the eldest son of the late William Marshall... View Obituary & Service Information

The family of Wes Cross created this Life Tributes page to make it easy to share your memories.

Send flowers to the Cross family.