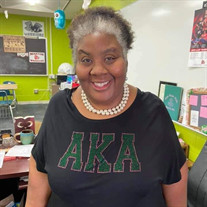 Reflections of a Beautiful Life Tonji Alicia Wheatfall Lewis was born June 10, 1971, to her doting parents Alvin and Shirley Wheatfall in Austin, Texas. She spent her early years in Round Rock, Texas, and moved with her family to Arlington, Texas during the summer of 1980. Tonji attended Arlington public schools, graduating from James Martin High School in 1989. At Martin High Tonji excelled academically with honors, was a member of the Track team, and was the Trainer for the Volleyball Team. Tonji attended Texas A&M University in College Station, Texas, where She was initiated into Eta Line, Xi Psi Chapter, Alpha Kappa Alpha Sorority Incorporated in1991. After earning her Degree in Journalism in 1993, she began her career in Education with Fort Worth ISD, and later began working with Arlington ISD at her Alma Mater James Martin High School where she worked until her passing. Tonji was a dedicated Educator committed to each child who crossed her path. Her excellence as an educator was recognized by several honors. A few of her most treasured accomplishments were being nominated for James Martin High School teacher of the year 2 times and as a multiple recipient of the STAR award in which students in the top 2% of their class choose their most impactful teacher. She was also selected to be a participant in a leadership program through The Holdsworth Center. She loved her students. She was enthusiastic about helping others. Quick to offer a word of encouragement to anyone who sought her out and someone you could count on to be there in the time of trouble. Love was the central component of her existence. She loved freely and completely. Tonji married the love of her life, Jonathan Lewis on August 6, 1994. She and Jonathan are the proud parents of one daughter, Sarah Elizabeth Lewis. She was devoted to her family and cherished and cared for them diligently. She was a faithful member of Cornerstone Baptist Church, where she was involved in the following ministries: Sunday School Women's D, Women of Influence, Children’s Ministry, and the Finance Ministry. Tonji transitioned from this life on the afternoon of November 26, 2021. She was preceded in death by her father Alvin Wheatfall. She is survived by her beloved husband Jonathan, daughter Sarah Elizabeth, mother Shirley Ross Wheatfall, brothers; Cedric Wheatfall (LaTunya) and Charles Ray Hester. She is also survived by a host of aunts, uncles, nieces, nephews, relatives, friends, brothers and sisters in Christ, and her sisters of Alpha Kappa Alpha, Sorority Inc.

Reflections of a Beautiful Life Tonji Alicia Wheatfall Lewis was born June 10, 1971, to her doting parents Alvin and Shirley Wheatfall in Austin, Texas. She spent her early years in Round Rock, Texas, and moved with her family to Arlington,... View Obituary & Service Information

The family of Tonji A. Lewis created this Life Tributes page to make it easy to share your memories.

Reflections of a Beautiful Life

Send flowers to the Lewis family.