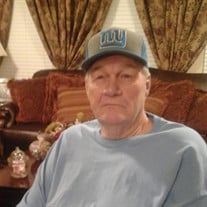 Thomas Michael Sawyer was born on October 6th, 1950 to Tom Sawyer and Marion Carroll Sawyer in Lamesa, Texas. He is survived by his wife and college sweetheart, Teresa Holmes Sawyer, whom he married November 12, 1994; his two sons, Michael Joseph Sawyer and Thomas Colt Sawyer, and his four step-children, Justin Gray, Joshua Gray, Jason Gray and Jennifer Gray. He loved his family and he treasured his many grandchildren. Early in life, he developed a true passion for sports - football, baseball and basketball. Years of hard work and dedication paved his way to the games he loved and afforded him an opportunity to play professional sports, playing football for the Atlanta Falcons, and baseball for the Met's in the minor leagues. Later in life, he toured with regional softball leagues and was known as the "Home Run King." Many called him "Moose," an appropriate name for his size and athletic abilities. He had an incredible ability to instantly retrieve sports trivia, game and player statistics, and team history dating back decades before he was even born. He could weave a story that would captivate you and make you yearn for more. His charm and knowledge could leave you believing you had actually experienced the game. He was a very generous, gentle giant, who made friends in an instant and kept them close to his heart throughout his entire life. He was often known as "the life of the party," and he enjoyed every holiday and every game he played. Later in life, he loved to cook, to bake and entertain his family and friends. He was a man you could never forget; he could make you believe in yourself and he could find humor in everything. His wit could make you laugh when you weren't sure why you were laughing. He was a loving and passionate husband and a friend to all who knew him. He loved the Lord, the life he was given, and the friends he made along the way. He was a treasure; the world is a smaller place without him.

Thomas Michael Sawyer was born on October 6th, 1950 to Tom Sawyer and Marion Carroll Sawyer in Lamesa, Texas. He is survived by his wife and college sweetheart, Teresa Holmes Sawyer, whom he married November 12, 1994; his two sons, Michael Joseph... View Obituary & Service Information

The family of Thomas Michael Sawyer created this Life Tributes page to make it easy to share your memories.

Send flowers to the Sawyer family.