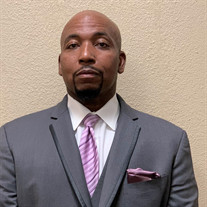 Terrence R. Williams was born March 18, 1970 to Pastor Percy and Nettie Williams in Detroit, Michigan. He is the youngest of five children and he loved his family immensely. Terrence accepted Christ at an early age and found joy and fulfillment in serving God through serving others. He was a member of Movement City Church under the leadership of Pastor Darius Johnston. After graduating from high school in Shaw Mississipi, he served in the United States Army. Terrence pursued several careers, but his passion for learning and helping others led him to his calling in education. As an educator, he made an impact on all whom he encountered. He was gifted in turning negative situations into positive outcomes, and known to many as the “glue” that held his family and work family together. During his tenure as an educator within Fort Worth ISD and Crowley ISD, he served in the capacity of coach, mentor, and friend to many students, parents, and colleagues. Coach Williams leaves a legacy of love and a model of excellence for: his son, family, friends, students and student-athletes entrusted to him. Terrence lived his life to the fullest and never met a stranger. He met Danelle in 2017, and was united as one, to his “soulmate,” on March 6, 2021. He took pride in exemplifying “Agape” love for his wife, Danelle, by providing, protecting and loving her as God commanded in 1 Corinthians 13:1-13. He was a devoted father to his only child, Kaleb Williams, who was covered by this same “Agape” love. Early Wednesday morning, October 6, 2021, with his wife and son by his side, God saw Terrence’s weariness and called him home. He is proceded in death by his parents (Pastor Percy and Nettie Williams), oldest sister (Vernita Pointer), and his favorite uncle (Edward “Lil Bro” Ryles). Terrence leaves to cherish his memory- wife Danelle, son Kaleb, brother Eduaduo (Kemia) Andrews, two sisters: Sonji Lightbourn and Kimberly Andrews, both of Tacoma, Washington, special nieces, and nephews: Tellis and Shavon Andrews, Edward (Alison) Andrews III, Ebony Andrews, Tiffany and Renickica Gardener, Dana (William) Farmer, Andrew and Aaron Lightbourn, great-nieces and nephews, godparents Cecil and Demeta Sharp, and a host of relatives, friends, and colleagues.

Terrence R. Williams was born March 18, 1970 to Pastor Percy and Nettie Williams in Detroit, Michigan. He is the youngest of five children and he loved his family immensely. Terrence accepted Christ at an early age and found joy and fulfillment... View Obituary & Service Information

Send flowers to the Williams family.