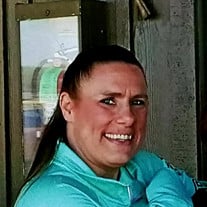 Teresa Lynn Ackerson, 49, of Arlington, TX, began her eternal life on Saturday, August 14, 2021. Her life will be celebrated Saturday, August 28 from 1:00—3:00PM at Mansfield Funeral Home, Mansfield, TX. A memorial service and interment will be held Friday, September 3 at 2:00PM at Stordahl Cemetary southeast of Wildrose, ND. Teresa was born on January 21, 1972, to James and Faye Salveson in Crosby, ND. At only three months old, she moved to Killeen, TX where her dad was stationed in the Army. Her family returned to Crosby two years later and then moved in 1978 to farm south of Wildrose. After graduating from Wildrose High School in 1991, she attended Williston State College. While pursuing nursing, she worked at the indoor and outdoor pools and met her husband, Michael Ackerson. The two wed on August 5, 1995, and together they welcomed three boys: Justus, Joren, and Jarrett. Motherhood didn’t slow Teresa from continuing her education and she received her Bachelor’s in Nursing degree from University of Mary. In 2001, Teresa began a new pursuit in travel nursing with her first contract relocating her family to Lubbock, TX. She and Mike found “home” and settled in Arlington, TX to raise the boys. Teresa took great pride in her profession and worked in a variety of nursing settings, including women’s health, postpartum, teaching, medical-surgical, and most recently behavioral health. Teresa loved to swim and play volleyball, and even took up hockey for a while when they moved to TX. She had a passionate love affair with her favorite sports teams, especially her most beloved Dallas Stars hockey team. She was sweet and a little bit spicy—Teresa had a rebellious side and a sarcastic, witty sense of humor. She had questionable taste in music and attended one too many 80s rock band concerts in her lifetime. Although concerned about the promotion to being a "young, hip" grandma, she was very much looking forward to meeting her first grandchild. Blessed to have shared her life and carrying her spirit on are her husband, Michael; sons Justus, Poplar, MT, Joren and Jarrett, Arlington, TX; grandson Levi; father James Salveson, brother Timothy Salveson, sister Mandi (Dustin) Wimer, mother-in-law Marilyn Gutschmidt; brother-in-law Jeff, sister-in-law Melissa, and all her nephews and nieces. Teresa was preceded in death by her mother and her grandparents Marvin and Dorothy Krueger and Paul and Edyth Salveson. The family asks memorial donations be made to help shine a light on mental health. Considerations include American Foundation for Suicide Prevention, National Alliance on Mental Health, or National Suicide Prevention Lifeline. “Be kind, for everyone we meet is fighting a battle we know nothing about.”

The family of Teresa Lynn Ackerson created this Life Tributes page to make it easy to share your memories.

Send flowers to the Ackerson family.