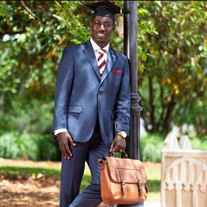 Stevenson Guerrier died Saturday, February 5, 2022, in Dallas, Texas. He died of natural causes. Stevenson is survived by his brother Woo Guerrier of Miami, Florida, his family of David and Tanya Wilkins and their daughters Macie, Morgan, and Meagan of Tallahassee, Florida, and Woo’s family of Corey and Robin Sanders and their children Dantavius, Corey Jr., Lyric, Dailon, and Caius of Homestead, Florida. Stevenson is also survived by his three sisters and their families, including Marie and Max Joseph and their children Maxamillion and Maxine and Linda Blaise and her daughter Mikhail of Jacksonville, Florida. Additionally, Stevenson had numerous cousins including Clermin, Clarisse, and Maxine of South Florida. Stevenson was born in Haiti and grew up in Homestead, Florida. He graduated from South Dade High School with honors in 2015. He then attended Florida State University, where he excelled in all aspects of college life. He was one of the first minority graduates of the FSU Jim Moran College of Entrepreneurship, he was elected as a Senator of the Student Government Association, he served as a member of the Student Advisory Board, he was very active in the CARES program at FSU, serving in numerous leadership positions including the Leadership Council, he was a leader in the Unconquered Scholars Program, and he was an active member of the LifeConnectors mentoring program. Furthermore, he was even elected by his peers as an FSU Homecoming Court Representative his senior year. Stevenson was hard-working, persistent, and determined. In 2018, he completed his naturalization requirements and became a United States citizen. His parents were originally from Haiti, and they died when he was young. Stevenson and his brother, Woo, had a hard life as kids, being placed with relatives and the foster care system. Despite those obstacles, Stevenson and his brother have thrived in their lives and are seen as role models to many. Upon graduation in 2019, he accepted a position in Atlanta, Georgia for Continental Tire and Rubber Corporation as a Sales Representative. Last year, he accepted a new position in Dallas, Texas with Willis Towers Watson as a Corporate Risk and Broker Analyst in the Insurance industry. Stevenson was a hardworking and enthusiastic employee and was on track to enjoy a successful and rewarding career. Outside of his many accomplishments, Stevenson was a one-of-a-kind genuine person. He loved people and loved being loved. His contagious personality was noticed by everyone, and thus he had a large contingent of friends in every walk of life he encountered, especially from his days at FSU. Stevenson loved basketball as a player, a fan, and a mentor. He would play ball every day he could and enjoyed mentoring younger players in the game as well. In addition, Stevenson’s Christian faith was evident in his life both through his volunteering activities at church and camps and his active involvement in the church. A memorial and celebration of life service will be held for Stevenson on February 18 and 19 in his hometown of Homestead, Florida. Visitation will be from 5 – 8PM on Friday, February 18 at Caballero Rivero Palms Woodlawn Funeral Home and Cemetery in Homestead. The funeral service will be on Saturday, February 19 at 11AM at the Restoration Church in Homestead. The funeral service will be followed by a graveyard service. In lieu of flowers, the family requests donations be made to the Unconquered Scholars Program at Florida State University. Stevenson was one of the early members of this program, which provides academic and social support to FSU students who were from the foster care system or related homeless life situations. A scholarship program will be established in his name which will inspire others to follow in his footsteps. Checks can be written to the Florida State University Unconquered Scholars Program and mailed to Lisa Jackson, who is the Senior Program Director for CARES at FSU, at 109 Collegiate Loop, MC 2139, Thagard Building Office 319, Tallahassee Florida 32306, or to David Wilkins. Online donations can also be made at this link – https://give.fsu.edu/StevoGuerrierMemorial.

Stevenson Guerrier died Saturday, February 5, 2022, in Dallas, Texas. He died of natural causes. Stevenson is survived by his brother Woo Guerrier of Miami, Florida, his family of David and Tanya Wilkins and their daughters Macie, Morgan, and... View Obituary & Service Information

The family of Stevenson Guerrier created this Life Tributes page to make it easy to share your memories.

Send flowers to the Guerrier family.