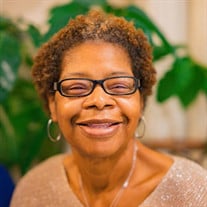 Sherrie Boyd was a loving mother, grandmother, daughter, sister, aunt, cousin, and friend Matthew 5:4 (KJV) 5:4 Blessed are those who mourn, for they will be comforted. Sherrie Boyd entered into her heavenly rest, transitioning peacefully at home on March 6, 2022. To be clear Sherrie was a survivor acting with a sense of urgency, life, and love. She knew she had work to do and she got it done lighting the path to God by showing forth His Grace. Sherrie Mildred Boyd was born on May 14, 1960 in Flint Michigan. She is the daughter of the late Rev. John T. Boyd and Phyllis (Shepard) Boyd. Affectionately known as “ReeRee”, Sherrie shared her childhood with her lovable older sister Pam, and attentive younger sister, Laurie. Sherrie accepted Christ at an early age and was baptized by Rev. Robert R. Gordon at St. Paul Missionary Baptist Church in Flint, Michigan. She enjoyed singing in the choir. Later she joined Galilee Missionary Baptist church under the leadership of her father, Rev. John T. Boyd, where she took on the role as the church’s secretary. Sherrie was skilled at “first showing herself friendly”, listening and letting God’s Grace speak through her many words of wisdom. Sherrie developed and cherished lifelong friendships many of which existed until she transitioned. As a proud “Wildcat”, Sherrie graduated from Flint Northwestern High School, class of 1978. Further enhancing her professional career she continued her education graduating from Baker Business College. In 1982, Sherrie Boyd was joined in holy matrimony to Cleophus Lacey and to this union, they were blessed with two sons, Nathan and Cleondre. Sherrie balanced her career aspirations and family, devoting countless years nourishing both. Throughout the years her family relocated for career opportunities to various states from Michigan, to Tennessee, to Georgia and in 2007 they moved to Arlington,TX. She was a dedicated employee of the North Dallas Shared Ministries where she stayed until declining health conditions caused her to retire. Sherrie was famous for hosting her annual “Thankful” Potluck Thanksgiving Feast. Family and friends traveled from near and far to experience the warmth of the season along with their favorite culinary dishes. You could be sure that her guest list would be coordinated with candid pictures on the original placemats that she created as mementos to that year’s feast. Sherrie loved to travel and enjoyed spending quality time with her mother. She also looked forward to her grandchildren spending the weekend with her. Sherrie became a faithful member of the Mt Olive Baptist Church, Arlington, Texas under the leadership of Pastor James P. Thompson Jr. She greeted all she met with her infectious smile, until God called her into His Divine Rest. Sherrie Boyd leaves to cherish her memory: two sons, Nathan Lacey (Joy Jeffries), Ft Worth, Texas, Cleondre Lacey, Atlanta, Georgia; two grandchildren, Nathan Lacey Jr., and Natalie Lacey; Mother, Phyllis Boyd of Arlington, Texas; two sisters, Pam Henderson of Las Vegas, Nevada and Laurie Etherly of Corona, California; one brother, Dewey Carter of Las Vegas, Nevada; step daughter, Tiffany Triplett (Daughter-Angela Triplett); Three uncles, Alfred Shepard of Flint, Michigan, Louis Sneed of Saginaw, Michigan, and Tito Curry of Saginaw, Michigan; One aunt, Elizabeth Dixon (Grover) of Flint Michigan; two god daughters, Tariya Sanders, Kierra Massey. A cherished host of relatives, nephews, nieces, cousins, and friends including Cleophus Lacey, Roxanne Jenkins (Best Friend), John Ray (Boyfriend). Sherrie Boyd is preceded in death by her father, Rev. John T. Boyd, Grandparents, Robert and Sarah Shepard, Rueben and Annie Boyd, many maternal and paternal aunts and uncles, One niece Mahogany Boyd. Sherrie’s last phrase to a close friend was “Thank God, I believe in the Trinity”. 1 John 5:7 (KJV) For there are three that bear record in heaven, the Father, the Word, and the Holy Ghost: and these three are one. Special thanks to Mt.Olive Baptist Church, Sheila McClinton-Wells (lifelong friend), Geraldine Turner, Judy Rorrie, Daryl Jeffries, and the Lacey family.

Sherrie Boyd was a loving mother, grandmother, daughter, sister, aunt, cousin, and friend Matthew 5:4 (KJV) 5:4 Blessed are those who mourn, for they will be comforted. Sherrie Boyd entered into her heavenly rest, transitioning peacefully... View Obituary & Service Information

Send flowers to the Boyd family.