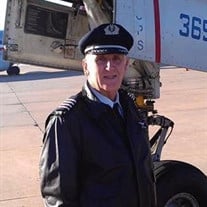 John Scott Cashel succumbed to failing health conditions on June 1, 2017 while hospitalized in Arlington, Texas. He was born on October 14, 1949 in Trenton, New Jersey the oldest son of John and Elizabeth (Pearl) Cashel. He was preceded in death by his parents, and his son, Justin S. Cashel. He is survived by his brother Theodore Cashel, his loving wife LouAnn, daughters Jennifer Cashel Higy, Erin-Rae Cashel, Maureen Cashel, Kyla Cashel and grandchildren, Jordan and Jensen Higy, Jaidyn Martinez and numerous nieces and nephews. Scott always had a passion for flying and even received his private pilot’s license before receiving his driver’s license. He was a U. S. Army Veteran having served in Vietnam and Thailand flying fixed wing aircraft and later in Germany and the US piloting helicopters. After his military service, he joined American Airlines where he piloted commercial air craft. He retired from American in October, 2014 as an International Wide Body Captain. Since retiring, he and Lou Ann have provided countless hours of service through their Church and other organizations from their residence here in Grand Prairie, Texas. A funeral service will be held at 11:00 AM, Saturday, June10th at the Church of Jesus Christ of Latter-day Saints at 2010 South Carrier Parkway in Grand Prairie, Texas with internment following on Monday, June 12 at 11 AM at the Dallas-Fort Worth National Cemetery located at 2000 Mountain Creek Parkway, Dallas, Texas. The family will receive close friends beginning at 10 AM at the Church prior to the funeral service. Pallbearers are Theodore Cashel, Jordan Higy, Chris Thompson, Oren Montgomery, Robert Tarvin, Wade Hancey, Charlie Esquivel and Robert Sanders.

John Scott Cashel succumbed to failing health conditions on June 1, 2017 while hospitalized in Arlington, Texas. He was born on October 14, 1949 in Trenton, New Jersey the oldest son of John and Elizabeth (Pearl) Cashel. He was preceded in... View Obituary & Service Information

The family of Scott Cashel created this Life Tributes page to make it easy to share your memories.

Send flowers to the Cashel family.