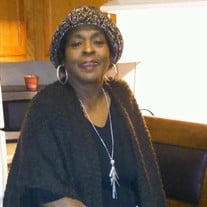 Sandra M. Clark, age 73 of Tyler, Texas was born January 9, 1947. She departed this life on Thursday, January 7, 2021 at her home in Tyler, Texas. Sandra was the daughter of John Henry Martin and Orssie Lee Leadon-Martin. Sandra was preceded in death by both her parents. Sandra was a fun, loving, carefree mother and grandmother to her children and their families as well as her friends. She never met a stranger. Those who knew her can attest she was very outspoken, independent, with a carefree attitude and lived by her own terms. Her family have so many colorful memories that they will forever cherish. Sandra enjoyed spending time outdoors and attending to her fur babies. She loved animals, all kinds, especially her dogs. Her greatest joy in life, came from being a “keeping it real” grandma and spending time with her family. Sandra received her Masters degree from Paul Quinn College in Dallas, Texas. She went on to work for the State of Texas as as a parole officer. She also worked as a counselor with the Amelia Court AIDS/HIV Division helping to educate the youth in health care and prevention methods. Sandra is survived by her children: Daughter, Lisa Swearinger (Donald) of Garland, Texas; Son, Quentin Jackson (Elizabeth) of Red Oak, Texas; Daughter, Angela Galloway of Dallas, Texas; Son, Rodney Jackson of Dallas, Texas; Daughter, Rebekka Thomas-Patt (Eric) of Cedar Hill, Texas; Daughter, Joanna Thomas of Dallas, Texas; Stepdaughter, Shinika Clark of Lancaster, Texas. Sandra has “17” grandchildren and a host of great grandchildren. Sandra is also survived by her sisters Andrea Henry (twin sister), Madalyn Canady, Kathy Thomas and Brother Charles Martin along with other relatives and friends. Let not your heart be troubled: ye believe in God, believe also in me. In my Father's house are many mansions: if it were not so, I would have told you. I go to prepare a place for you. And if I go and prepare a place for you, I will come again, and receive you unto myself; that where I am, there ye may be also. And whither I go ye know, and the way ye know. John 14:1-4

Sandra M. Clark, age 73 of Tyler, Texas was born January 9, 1947. She departed this life on Thursday, January 7, 2021 at her home in Tyler, Texas. Sandra was the daughter of John Henry Martin and Orssie Lee Leadon-Martin. Sandra was preceded... View Obituary & Service Information

Send flowers to the Clark family.