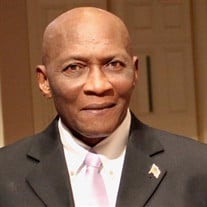 On January 8, 2020, Samuel Emmanuel Ekundayo Clarke, loving father, brother, uncle and friend, passed away at the age of 76. Samuel was the third child of Samuel Reginald and Hannah Elizabeth Clarke of Freetown, Sierra Leone. He completed his primary education at Cathedral Boys School and secondary education at the CMS Grammar School. After completing his education, he entered into the workforce and worked at the Sierra Leone Broadcasting Service (SLBS) as a newscaster. After leaving SLBS, he worked for the Sierra Leone Brewery and then Mobil Oil Corporation. In 1975, Samuel left Freetown for the United States to further his studies at Lincoln University in Jefferson City, Missouri, where he would study journalism and graduate with a Bachelor of Arts Degree in Journalism and English. Shortly after arriving in Missouri, Sam met his love, Regina Joy Jones and they married in October 1976. After graduating college, Samuel moved to Kansas City, Missouri with his wife, where they would start a family raising their daughter Tiawna and son, Samuel Jr. Several years later a job opportunity brought Samuel and his family to Dallas, TX. Sam was a loving father who emphasized the importance of education, often vowing that his children’s success would come by “working with their brains and not with their backs.” Though he worked tirelessly as a Restaurant Manager for nearly 30 years to support his family, he always wore his brilliant and infectious smile. He loved music, especially Krio, Gospel, and R&B music and he enjoyed traditional African dishes, especially those prepared by his sisters and niece. He was a proud member of Krio Descendants Union (KDU) and a natural at public speaking. His favorite pastime was spending time in conversation with his closest friends and family, which will be greatly missed. Samuel was preceded in death by his parents, Samuel and Hannah Clarke. He is survived by his children, Samuel and Tiawna Clarke and their mother, Regina Clarke. Brothers: Isaac Clarke, Victor Clarke, Reginald Clarke Sisters: Dora Clarke, Winifred Clarke-Osunbor, Marjorie John Aunt: Mrs. Yomi Nicol Uncle: Dr. Christian Horton Sisters-in-Law: Morenike Clarke, Clarissa Clarke,Tammy Dozier, Trina Loney Brothers-in-law: Lugard Osunbor, Peter John, Rodney Jones, Eric Jones, Brian Jones Many Cousins, Nieces and Nephews including Jonathan Nicol, Dr. Marcella Cole, Yomi Cole, Onike Clarke May His Soul Rest In Perfect Peace

On January 8, 2020, Samuel Emmanuel Ekundayo Clarke, loving father, brother, uncle and friend, passed away at the age of 76. Samuel was the third child of Samuel Reginald and Hannah Elizabeth Clarke of Freetown, Sierra Leone. He completed his... View Obituary & Service Information

The family of Samuel E. Clarke created this Life Tributes page to make it easy to share your memories.

Send flowers to the Clarke family.