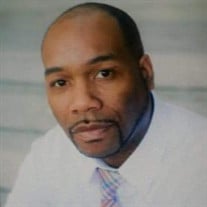 Salaris Shawn Edwards born April 12, 1971, died unexpectedly on December 4, 2021 of cardiac arrest after receiving a terminal stage 4 cancer diagnosis. He was born in Jeanerette, Louisiana and was the son of the late Joseph Edwards, and Helen Butts Edwards. Salaris graduated from Jeanerette Senior High School class of 1991 and was active in the band. Following graduation, he attended Grambling State University of Grambling Louisiana majoring in Engineering. After a tragic car accident, Salaris left college and began this journey called life. He moved to Texas as a result of being displaced by Hurricane Katrina in 2005. It was here that he became a faithful member of Koinonia Christian Church where he served on the usher ministry, the parking lot ministry, and the outreach ministry. Having faced homelessness himself, and seeing the pain, turmoil and destruction of other individuals experiencing homelessness, Salaris grew a passion for outreach and helping those individuals. Salaris never met a stranger. Everywhere he went he would have a conversation with anyone who would listen to his stories of how Christ saved him and how much Jesus had done for him. Many can testify of the stories he told them. He loved gospel and old school music and although he may not have known all the words to some songs, he would make up his own words and would sing enthusiastically. In his life and his walk with Christ he experienced highs and lows, pain and joy, laughter and sadness. He lost some battles against the flesh and won some victories but he loved Christ and was never ashamed to show it or tell anyone about Him. Predeceased by his father, Joseph Edwards, one brother Terren Edwards, one sister Jeanette Edwards, paternal grandparents, Molly and Alec Edwards, maternal grandparents, Bernice and Victor Butts, Sr. Salaris is survived by three sisters, Tonia Edwards of Mansfield TX, Yolanda and her husband Joseph Nicholas of Arlington TX, Conswella Edwards of Arlington TX, and one brother Arnold Edwards of Lafayette LA, three nieces Zion Nicholas, Jaci Edwards, and Amburee Edwards, and five nephews Joshua Edwards, Jaidon Edwards, Jordon Nicholas, Terren Nicholas, and Joseph Nicholas, Jr. He also leaves behind two aunts Ida Edwards and Delores and her husband Willie Brown, one uncle Joseph “JC” Butts and his wife Tracy Butts, a special godmother, Joe Ann Coleman and a host of cousins and other family members and friends. The final viewing will be held on December 18, 2021 at 12 noon immediately followed by a service of remembrance at 1 PM central at Koinonia Christian Church, 2455 SE Green Oaks Blvd, Arlington TX 76018. Interment will be held at Grand Prairie Memorial Gardens, 3001 S Beltline Rd, Grand Prairie, TX 75052. In honor and remembrance of Salaris, those who wish to remember him in a special way may make gifts in his memory to one of the three ministries (Outreach, Ushers and Parking Lot) that Salaris faithfully served in at Koinonia Christian Church by cashapp: $InMemSEdwards. Hotel Accommodations: LaQuint Inn & Suites by Wyndham Dallas Grand Prairie South 2131 I-20 Grand Prairie, TX 75052 To send flowers or a memorial gift to the family of Salaris Shawn Edwards, please visit our Sympathy Store.

Salaris Shawn Edwards born April 12, 1971, died unexpectedly on December 4, 2021 of cardiac arrest after receiving a terminal stage 4 cancer diagnosis. He was born in Jeanerette, Louisiana and was the son of the late Joseph Edwards, and Helen... View Obituary & Service Information

Send flowers to the Edwards family.