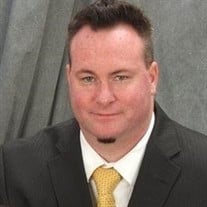 Ryan John Cunningham was born on November 6, 1975, in Washington D.C., to Nancy (McNulty) and Joel Cunningham. He was youngest of two sons. He attended St. Agnes Grammar School and graduated from Middletown High North in Township, New Jersey. Ryan entered into the United States Army in March 2006, where he served in Operation Iraqi Freedom. While serving his country he earned the Army Good Conduct Medal, the Global War on Terrorism Service Medal, The Iraq Campaign Medal with Campaign Star, Army Service Ribbon and the Overseas Service Ribbon. He retried from the Army in April 2011. Ryan had two big loves in his life, his family and music. He had a strong passion for bass guitar and piano which everyone enjoyed hearing him play. On May 14, 2009, he married his life partner, Victoria Stephens, in Killeen, Texas. From that union, a beautiful daughter was born, Eliza Charisse Cunningham on March 8, 2014. He entered the pearly gates of Heaven on Saturday, March 14, 2020. He was preceded in death by his grandparents: Irving and Florance Cunningham and John and Margaret McNulty; and his uncle, Kevin McNulty. He is survived by his wife, Victoria Cunningham; his daughter, Eliza Cunningham; his mother, Nancy Cunningham; his father and stepmother, Joel and Paula Cunningham; his mother-in-law, Cheryl Stephens; his brother and sister-in-law, Todd and Nicole Cunningham; his nieces and nephews: Abagail, Emily, Connor and Nicholas Cunningham; as well as a host of aunts, uncles, cousins and friends.

The family of Ryan John Cunningham created this Life Tributes page to make it easy to share your memories.

Ryan John Cunningham was born on November 6, 1975, in Washington...

Send flowers to the Cunningham family.