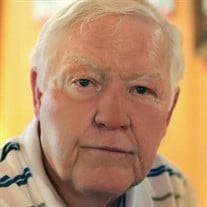 Roger Neal Pierce, 81 years, died Saturday, October 16, 2021, with Kay, his wife of nearly 52 years, and his adult daughters, Dawn Young and Denise Adams, at his bedside. Roger was born September 5, 1940, in Venice, California. He grew up in Wichita, Kansas, graduating from Wichita East High School in 1958. Shortly after graduation, Roger enlisted in the Navy serving for 3 years as a radio operator in aviation. Upon entering the workforce as a civilian, Roger held several jobs before becoming a manufacturer's representative for the remainder of his life. Roger met his wife, Kay, while living in Kansas City, Kansas in the late 1960s. They were married on November 28, 1969. They welcomed daughter, Dawn, into their lives in 1972, followed by daughter, Denise, in 1977. In 1981, Roger decided to start his own business and felt the state of Texas was the best place to do so. The family made their new home in the city of Grand Prairie where Roger was active for many years with the neighborhood association and served time on the city parks and recreation board as chairperson. Roger enjoyed many things in his life such as travel; fishing and bird hunting; great cars and the open road; old movies, especially those starring John Wayne and Audie Murphy; a good meal with barbecue or Tex-Mex being at the top of the list; a nice glass of Scotch, wine, or a margarita on the rocks; wildlife viewing; and dogs. Roger truly loved dogs. Being a salesman, Roger naturally had the gift of conversation and was always happy to engage with anyone and everyone. He never met a stranger. Roger was preceded in death by his mother, Ava Lee Leckron; his step-father, Mervin Leckron; older sister, Wanda Jenks; and many other beloved family members and pets. Besides his wife, Kay, and daughters, Dawn and Denise, Roger leaves behind sons-in-law, Clint Young and David Adams; granddaughters, Lillith Young and Laurel Adams; and grandson, Grayson Adams. Roger also leaves behind his younger siblings, Rodney Pierce and Nancy Fields, and their respective families; his brother-in-law, Edward Jenks, and his family; numerous friends and business associates; and his Golden Retriever, Shadow. Graveside services with military honors will be held Monday, November 1, 2021, at 10:30 in the morning at the Dallas-Fort Worth National Cemetery located at 2000 Mountain Creek Parkway, Dallas, Texas 75211. The family is hosting a luncheon following the service in celebration of Roger's memory. Please join them from 12:00pm - 1:30pm at El Primo's Mexican Grill and Cantina located at 2300 Matlock Road, Suite 21, in Mansfield, TX 76063. In lieu of flowers, the family requests that donations be made in Roger's name to any charity of choice or one of the following that holds meaning for Roger and his family: CURE Epilepsy, Breast Cancer Research Foundation or America's VetDogs. Roger's family wishes to express their sincere gratitude to the staffs of Cedar Bluff Assisted Living and Memory Care and Methodist Mansfield Medical Center.

Roger Neal Pierce, 81 years, died Saturday, October 16, 2021, with Kay, his wife of nearly 52 years, and his adult daughters, Dawn Young and Denise Adams, at his bedside. Roger was born September 5, 1940, in Venice, California. He grew up... View Obituary & Service Information

The family of Roger Neal Pierce created this Life Tributes page to make it easy to share your memories.