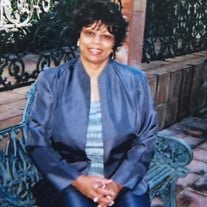 Rita Joyce Rabon-Howell was born to Theodore Roosevelt Parsons and Lenora Flossie Massey in Des Moines, Iowa, May 3, 1941. She grew up with a brother, Howard and a sister, Betty Lou, along with extended family members. Rita was educated in the Des Moines Public School system and earned an Associate of Arts degree in General Education at Los Angeles Trade Technical College June 16, 1977. She retired from General Motors Corporation after thirty-four years where she was one of the first women to be an assembly line worker at the California South Gate plant in 1970. She was also a Serena Fashion consultant winning many awards for empowering women to love their total selves. Rita was baptized and served God in numerous capacities at Great Commission Baptist Church in Ft. Worth, Texas where she developed a voracious passion for studying the Bible in her search for spiritual enlightenment. Rita was best known for cooking delectable, mouthwatering, and appetizing dishes she served with love to all who visited her. Additionally, she enjoyed arts and crafts that enabled her to make handmade gifts of love. Rita was an avid reader and a consummate self-taught intellectual with an expansive knowledge of world affairs in addition to being the family historian. She was also a connoisseur of a wide variety of music and she loved to shop. Rita put on her glorified heavenly body August 29, 2017, at seventy-six years old. She is preceded in death by her parents, Roosevelt and Lenora Parsons, her sisters, Patricia, Virginia, and Betty Parsons, and her brother, Howard Parsons. Rita is survived by her daughter, Monica L. Turner, two grandchildren, Jerry Turner and Hassani Turner, her lifelong friend Brenda Rakestraw and special cousin-friends, Almo Hawkins and Wilma Bradley in addition to numerous family members and associates.

Rita Joyce Rabon-Howell was born to Theodore Roosevelt Parsons and Lenora Flossie Massey in Des Moines, Iowa, May 3, 1941. She grew up with a brother, Howard and a sister, Betty Lou, along with extended family members. Rita was educated in... View Obituary & Service Information

The family of Rita Joyce Rabon-Howell created this Life Tributes page to make it easy to share your memories.

Send flowers to the Rabon-Howell family.