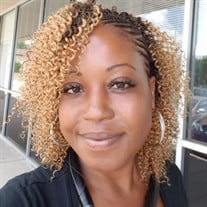 On September 9, 1985, in Homestead, Florida, a beautiful baby girl was born to Charles and Doris Clay. They named her Rebecca Maria Clay, but the name Maria was changed to Marie by one of the hospital officials. She grew into a sweet little girl with a winning personality. Rebecca, commonly called “Becky” attended Miami Heights Elementary. She was able to learn quickly and won several oratorical contest at school, beginning in Kindergarten. In high school, she took an interest in Law and began college with this in mind. She later changed her mind to Business and completed her Associate Degree in Business. She moved to Texas and met Clifton Rodgers, who became the love of her life. They were united in marriage on August 1, 2009, and to this union three children were born: one son, Preston Bernard Rodgers, who preceded her in death, and two daughters Claire Ann, and Zoey Lynn Parker Rodgers. Rebecca had a loving and forgiving personality which drew many people to her. She was kindhearted and wanted to have family and friends around her. Even though she suffered greatly for over four years with various medical complications, she was dedicated to family and friends. In September of 2019, she decided to give her heart to God. She learned to pray and was faithful to pray for family and acquaintances. She found strength in God to overcome her severe difficulties. Rebecca held to her profession of faith in God until He called her home on August 26, 2020. Her dad, Charles Clay and two siblings, Judith Clay and Billy Joe Clay proceeded her in death. Rebecca leaves to celebrate her life, her husband, Clifton; her two daughters: Claire Ann and Zoey Lynn Parker; her mother, Doris Clay; her mother-in-law, Debra Benjamin; three sisters: Eva Isaac, Doris Johnson, Sharon Adams (Jerome); additional sisters: Kimely Pratt and Tiffany Sneed; six brothers: John, Anthony, Charles, Roy, Aaron (Novella), Timothy; two sisters-in-law: Lakeitha Rodgers and Terrah Benjamine; one brother-in-law: Clifford Rodgers; one aunt: Rose Hill; two uncles: Reginald and Raymond Hardman; and a host of nieces, nephews, cousins, saints and friends.

On September 9, 1985, in Homestead, Florida, a beautiful baby girl was born to Charles and Doris Clay. They named her Rebecca Maria Clay, but the name Maria was changed to Marie by one of the hospital officials. She grew into a sweet little... View Obituary & Service Information

The family of Rebecca Clay created this Life Tributes page to make it easy to share your memories.

Send flowers to the Clay family.