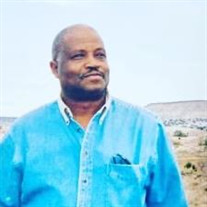 Philip Wayne Jackson was born on March 28, 1944 at Parkland Hospital in Dallas, Texas. He was the 2nd of 5 children born to Willard Jackson and Lillie Bell Morton Jackson. After a courageous battle with pneumonia, Philip peacefully gained his wings on Tuesday, November 24, 2020, at Mansfield Regional Hospital, Mansfield Texas. Philip was baptized at the church his family helped establish. At an early age he accepted Christ as his personal Savior at Ben Washington Baptist Church in Irving, Texas (Bear Creek). He sang in the choir and served on the Usher Board. Philip began his education at the Sowers School in Bear Creek (Irving, Texas). His dad, Willard Jackson, and other Bear Creek residents purchased the land for J. O. Davis School to be built and Phiip attended the rest of Elementary School, Junior High and High School there, graduating in 1961. Philip was a talented quarterback for the J. O. Davis Bruins. He also ran track as a long distance runner and played basketball as well. Philip loved to work! He just celebrated his 55th anniversary with Bell Helicopter on October 4, 2020. He began working at Sears & Roebuck around the age of 16 and worked there assembling lawn mowers and appliances, learning valuable skills that would help him later. He worked there until he was drafted in the U.S. Army and attended basic training in Ft. Hood, Texas. Upon honorable discharge from the U.S. Army, he joined his father and worked for Bell Helicopter and was an active employee until he became ill. He loved his hometown of Bear Creek and was President of the West Irving Improvement Association from 1975 to 2001. He purchased and renovated the Masonic/Eastern Star Lodge Hall. The restoration would take several years and Phiip spent his spare time ensuring it was completed. With encouragement from his daughter, Ashley, Philip later donated the building to the City of Irving, where it stands in the Jackie Townsell Heritage Center at the corner of Jackson and Gilbert Road in Irving. Philip was the happiest when he was around his children and grandchildren. His birthday, Father’s Day and Thanksgiving became the times that his children would spend with him. He took his children, their spouses, and grandchildren on fabulous, fun filled vacations. From cruises, beaches, to amusement parks, it was his time that he sat aside just for his children. Schlitterbaun, Disney World, South Padre Island and the Caribbean were family favorites. After he spent time with his family he would then cruise with his friends from Bear Creek and from South Carolina. He is preceded in death by his mother and father. He is survived by his children: Sheree Hoops Jackson (Ray), Cathy Bailey (Terence), Dalya Hartford White, Philip W. Jackson, Jr., Christopher Tremaine Jackson, and Ashley Hill-Jackson Smith (Bryant); grandchildren: Ollie Hoops III (Danielle), Trey, Danielle Lawson, DeAndre Farris, Chance Hoops, Mya White, Alexis Wilson (Dillon), Sun’Kajha Davis, Jaylen Jackson, Velura Jackson, Madison Lambert, Meagan Lambert, Cameron Jackson, Christian Jackson, Chance Jackson and Victoria Jackson; great-grandchildren: Saiya and Kashlyn Wright, Brooklyn Hoops, Brielle Lawson, Safari Wilson and Ollie Hoops IV; siblings: Willard B. Jackson (Gwen), Clora Virginia Wilson, Barbara Finney, Myrle Scott; and his cousin, Dixie Caraway, whom he considered his big sister and a host of relatives and friends.

Philip Wayne Jackson was born on March 28, 1944 at Parkland Hospital in Dallas, Texas. He was the 2nd of 5 children born to Willard Jackson and Lillie Bell Morton Jackson. After a courageous battle with pneumonia, Philip peacefully gained his... View Obituary & Service Information

Philip Wayne Jackson was born on March 28, 1944 at Parkland Hospital...

Send flowers to the Jackson family.