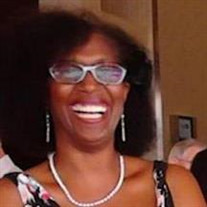 Patricia Sofia Bourgeois, affectionately known as Sofia, was born on March 23, 1964, at Wycoff Hospital in Brooklyn, New York. She was the first-born child of Irry Alejandro Mark Sr. and Patricia Taylor Mark. Sofia was raised in Brooklyn, New York until her family relocated to Inglewood, California. Sofia attended New York City Public Schools. She went to P.S. 273, George Gershwin Junior High School, and Thomas Jefferson High School. In 1980, her family relocated to California where Sofia attended and graduated from Inglewood High School. After high school, she attended Pennsylvania State College. Missing her family, Sofia returned to California and continued her education at Chapman University where she received her Bachelor of Arts in Education. On November 22, 1990, Sofia married her childhood friend, Claude F. Bourgeois. From that union, they had two children. They welcomed Jean-Claude in May 1995 and Marc in November 2002. Sofia is known for lovingly calling her husband and her two sons, “my men.” Sofia had a passion for education, cultural arts, and the welfare of children. Sofia thought it was important to expose her children and others to the arts. This led her to become an educator and taught first through fifth grade. Sofia lived and taught in California, Georgia, and Texas. Shortly after relocating to Texas, her high ambitions led her to establish Eagles In Motion Day Care Center out of her home for 13 years, where she was affectionately known as Mrs. Pat. After much consideration, Sofia decided to pursue her other passion, counseling. She attended King's University to obtain her masters, while she worked as a teacher with Keller ISD. Those who knew Sofia recognized her appreciation for cultural arts as she frequented many museums around the country. She also loved watching comedy films and going to comedy clubs. Sofia's favorite foods to eat were french fries and plátanos. Sofia highly valued traveling to foreign countries and luxuriating on the white sandy beaches in the Caribbean. Sofia doted on long nature walks and shopping for elegant clothes. Sofia will be remembered for her big smile, her contagious laugh, and her almost pollyanna rosie outlook. Sofia reverenced God and referred to Him as Father. She always spoke about His goodness. She had infinite love for her “men,” her family, and her cats. Last, but not least, she will always be remembered for her favorite color, purple. Sofia leaves to cherish her husband, Claude, son’s Jean-Claude and Marc. Mother, Patricia, brother’s Irry Jr, Anthony, sister, Nadia, brother-in-law, Alain, Andre (Suzanne), Anthony, sister-in-law, Jacqueline, and Simone. A host of aunts, nieces, great nieces, nephews, and cousins. On Wednesday, December 8, 2021, Sofia peacefully passed away at home with her husband, sons, mom, and family by her side.

Send flowers to the Bourgeois family.