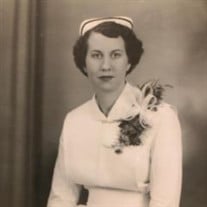 Nellie A. (Wheeler) DeWitt passed away peacefully at home in the loving arms of her family on October 7th, 2020. Nellie was born in Foreston, New Brunswick, Canada on December 17th, 1931. She was the youngest of five children and grew up on... View Obituary & Service Information

The family of Nellie DeWitt created this Life Tributes page to make it easy to share your memories.

Nellie A. (Wheeler) DeWitt passed away peacefully at home in...

Send flowers to the DeWitt family.