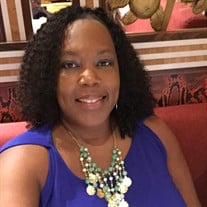 Michelle Tate Poteat was born October 30, 1967 in Tallulah, Louisiana, the daughter of Claude Tate, Jr and Essie Walker Tate. She attended Tallulah Public Schools. Michelle’s parents were both educators for many years and they instilled in Michelle a strong belief in the importance of higher education. It was this strong upbringing that led her to attend Grambling State University where she received her Bachelors of Science degree specializing in Computer Science. She was a long time resident of Mansfield, TX where she was employed by IBM Corporation for many years. She accepted Christ at an early age and was baptized at St. Matthews AME Church in Tallulah, LA. Michelle was a faithful member of Crossroads Christian Church where she served in the Children’s Ministry, and was an active member in her connect group. She touched the lives of many children and their parents over the years through sharing her love for Christ. Michelle loved life and loved being a mother to her three amazing daughters. Of all the titles and positions she held in this life, being their mother was her greatest joy. She leaves to cherish her precious memory three lovely daughters, Sydni Poteat, Syriana Poteat, Artrielle Coleman of Mansfield, TX; Brothers, Clifford Dwayne Tate of Tallulah, LA; Ricky Reynard Tate of Austin, TX; Special Nephew, Orlando Tremon Tate, Jr.; Aunts, Nellie Stewart of Cedar Hill, TX; Ruth Alexander Seattle, WA; Martha Webster (Clarence), Miami, FL; Uncle, Willis (Margaret) Tate; Seattle, WA a host of nephews, a niece, other relatives and friends. Michelle had a group of special friends who were more like sisters to her, Mary McCloud, Vickie Bradley, Shelette Stewart, Donna Kline and Tamara Scott. Michelle was proceeded in death by her parents, Claude Tate, Jr. and Essie Walker Tate; Brother, Orlando Tremon Tate. Paul Ash, who served as her manager at IBM for the last 10 years said, “Michelle touched everyone in a positive way she was the epitome of what we want our mangers to be.”

Michelle Tate Poteat was born October 30, 1967 in Tallulah, Louisiana, the daughter of Claude Tate, Jr and Essie Walker Tate. She attended Tallulah Public Schools. Michelle&#8217;s parents were both educators for many years and they instilled... View Obituary & Service Information

The family of Ms. Michelle Poteat created this Life Tributes page to make it easy to share your memories.

Send flowers to the Poteat family.