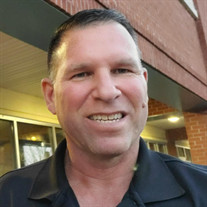 Michael Brian Peterson, age 57, passed away on August 11, 2021 at Methodist Mansfield Medical Center with his family by his side. Michael was born in White Sands Missile Range, NM, to Clyde William (Bill) Peterson and Mary Ellis Louis on January 9, 1964. Michael grew up in El Paso, TX and enjoyed playing sports and eating at Chicos Tacos. He made a point of eating at Chicos everytime he went back to visit. Michael attended the University of Texas at El Paso after graduating from Irvin High School and before enlisting in the US Air Force in 1983. He served in the US Armed Forces in various roles including fuels and cryogenetics; and, is extremely proud of his time with the Honor Guard before completing his military service in 2008. Michael married Christina Peery of Grand Prairie, Texas on October 17, 1999 in Grand Prairie, TX. After becoming an instant father to Jessica and Amanda Goodrich, Michael and Christina welcomed daughter Emily Peterson in 2000 and the family of five lived in Grand Prairie, TX, before moving and settling in Arlington, TX in 2005. Michael enjoyed traveling, collecting sports cards and coins, and serving various roles in the church. He was a member of the Fort Worth First SDA Church of Ft. Worth, TX but was baptized in 2000 into the Grand Prairie SDA church of Grand Prairie, TX. He served in various roles at the church, as Deacon and in Men's Ministries and would always lend a helping hand in any area of the church. He enjoyed most any opportunity to be with family and visit with his friends, with always a good meal included. He was also very proud of his Choctaw Indian heritage and that his grandfather, Solomon Louis (Sr.) was one of the original code-talkers from WWI. He was preceded in death by his grandfather, Solomon Louis Jr., mother, Mary Louis Tolbert, and his grandmother, Wahnetah Louis. Those left to treasure his memory are his wife, Christina, daughters, Emily, Amanda Cisneros (Martin) and Jessica Garcia (Rod), grandchildren, Noah, Nathan, Nicolas, Margot and Milo, his brother Donald Leavenworth, his uncle Michael Louis, his cousins, Kathy Butts, Kevin Louis, and father, Bill; as well as, his mother & father in law, William and Barbara Peery, extended family and a significant number of friends. Visitation will be held on August 18, 2021 from 11:15 am to 12:15 pm at Mansfield Funeral Home on Heritage Parkway in Mansfield, TX. Services for Michael Peterson will be held on August 18, 2021 at 12:15 pm to 1:15 pm at Mansfield Funeral Home with Pastor Derek Lazarus officiating. Burial will follow at Dallas-Fort Worth National Cemetery at 2:15 PM in DALLAS, Texas. Michael will be remembered for his love, patience, generosity, always knowing the best places to eat, his brisket making skills, his kind and gentle character and being a good friend. Michael's favorite charities were the Tarrant County Food Bank and Police & Sheriff Support Alliance. Face masks are encouraged for those in attendance for the visitation and funeral service.

Michael Brian Peterson, age 57, passed away on August 11, 2021 at Methodist Mansfield Medical Center with his family by his side. Michael was born in White Sands Missile Range, NM, to Clyde William (Bill) Peterson and Mary Ellis Louis on January... View Obituary & Service Information

The family of Michael Brian Peterson created this Life Tributes page to make it easy to share your memories.

Send flowers to the Peterson family.