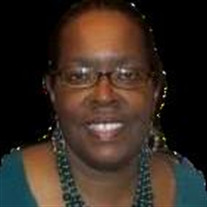 Mary Lee Brown-Henderson, known to many as “Tiny” was born on January 21, 1949 in Luxora, Arkansas to the union of the late Superintendent Cornelius B. Brown and Mother Bertha Mae Casey Brown. She was the sixth child of 11 children to this union. The family later relocated to Illinois in 1952. And at an early age Mary accepted Jesus Christ as her Lord and Savior. In 1968 Mary graduated from Alton Senior High. Mary was known to have many passions and big dreams. Following graduation, she went on to follow her dreams which included attending aviation school in pursuit to becoming a pilot. Mary’s passion also included her desire to have a professional modeling career. Mary successfully completed finishing school and lived out her dreams of becoming a model before going on to continue her post-secondary education at Southern Illinois University Edwardsville and Lewis and Clark Community College where she graduated and obtained her associate degree in Business Management. In June of 1980 she was united in holy matrimony to Jonathan Henderson and relocated to Houston Texas. From their union two sons were born, Jonathan Leon Henderson II. and Marlin Bryan Henderson. Mary’s career path led her to hold positions at the Social Security Administration, Texas Institute of Rehabilitation, Baylor University Medical Center and Prudential Insurance Company. In 1995 Mary gained a love for working with teen parents and gave 15 years of service at Lewis and Clark Community College working with the Teen Parent Program until her retirement in 2010. Mary was a member of True Way Church of God in Christ (Dallas, Tx) and Brown’s Faith Temple Church of God in Christ (Alton, IL), where she served in many capacities working with the youth department (Puritans, YPWW), Pastor’s Aide, Music Department (Choir), Women Department (Queens Court) and Sunday School and Mission Department. In addition to her commitment to her local church, Mary also spent many years doing international mission work. Mary traveled to Ghana, Africa, Jerusalem (Holy Land), and Tel Aviv. One of her most cherished moments was traveling to Jerusalem with her parents. While in Jerusalem she was baptized by her father in the Jordan River and laid in the tomb of Jesus. Over the years Mary touched the lives of people both young and old, but everyone knew that her love of being a devoted and loving mother was her greatest accomplishment. Mary supported her boys in all of their endeavors. It was always clearly understood by Mary that her boys could do no wrong and they were her first and second heartbeat. As her health began to change her oldest son Jonathan took the mantle of being her number one supporter and tirelessly worked as her primary care provider. Jonathan lovingly cared for his mother, as she had done with him, with genuine gentleness, patience and a sacrificial heart. It was evident that his mother was his first heartbeat. On Thursday January 7, 2021, after 71 years of service, the Lord called her home to be with him. She leaves to cherish her children: Jonathan L. Henderson II and Marlin B. Henderson of Phoenix, AZ, four sisters: Alma Jean (Walter) Washington, Alberta (Michael) Porter both of Alton Illinois, Mable Holmes of Lewisville, TX, and Rose Lenox of Charlotte, NC, three brothers: Cornelius (Dorothy) Brown Jr. of Peoria, IL, James Brown of Houston, TX, and Anthony Brown of Alton Illinois and a host of nieces, nephews, family, and friends. Mary is preceded in death by her parents Cornelius and Bertha Brown Sr., Siblings: Hancy Nelson, Zaddie Frison, and Christine Harris, three nephews: Sylvester Frison Jr. (Syl), Walter Washington Jr. (Jay), and Christopher Harris.

Mary Lee Brown-Henderson, known to many as &#8220;Tiny&#8221; was born on January 21, 1949 in Luxora, Arkansas to the union of the late Superintendent Cornelius B. Brown and Mother Bertha Mae Casey Brown. She was the sixth child of 11 children... View Obituary & Service Information

The family of Mary Lee Brown-Henderson created this Life Tributes page to make it easy to share your memories.

Mary Lee Brown-Henderson, known to many as “Tiny” was born on...

Send flowers to the Brown-Henderson family.