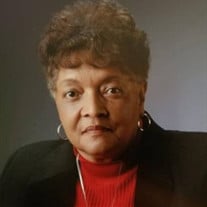 Join Mansfield Funeral Home as we celebrate the live of Marvis Yvonne Brown: https://vimeo.com/event/218591 Marvis Yvonne Brown was the youngest child of twelve born to Lula Armstrong Brown and Frank C. Brown on December 25, 1936, in Laurel, Mississippi. She graduated from Oak Park High School in 1954. She then attended Vallejo Jr. College in Vallejo, California. She later transferred to Grady Memorial School of Nursing at Spelman College in Atlanta, Georgia. Upon receiving her Bachelor of Science in Nursing, she returned to her home state and accepted the position of Head Nurse of Pediatrics at Mississippi State Hospital in Jackson, Mississippi. After three years, she accepted a position as Assistant Director of Student Health. Her tenure there would lead to her employment as the Director of the Foster Johnson Health Center on the campus of Grambling State University in Grambling, Louisiana, where she retired after more than thirty years of dedicated service. On March 21, 1969, she married Roscoe St. Clair Brown. God blessed this union with two children Marcia and Michael Brown. She was a very meticulous person and always wanted everything to be in its assigned place, but sometimes she had to add her own personal, final touch. She was a very caring and giving person. She accepted Christ as her Lord and Savior at a very young age. She was an active member of Lewis Temple CME Church for over forty-five years where she served in many of the ministries prior to relocating to Arlington, Texas. She was also a member of Alpha Kappa Alpha Sorority, Incorporated. Marvis was preceded in death by her beloved parents; all siblings; and her cherished husband of twenty-eight years. She leaves many to celebrate her memories including her children, Marcia Roschette Brown of Forney, Texas, and Michael Roshon Brown (Shonda) of Arlington, Texas; beloved grandson, Dylan Michael Brown; great-grandsons, Anderson and Samson Smith, all of Arlington, Texas; granddaughter, Taylor Robichaux; great-granddaughter, Ashlynn Robichaux both of Arlington, Texas; God-children, DeWanna Jefferson of Plano, Texas, Michael Isaac Mangrum of Oakland, California, and Marionne Mangrum of Quantico, Virginia; her most treasured niece, Doris Mangrum of Antioch, California; as well as a host of other nieces and nephews, relatives and friends.

The family of Marvis Yvonne Brown created this Life Tributes page to make it easy to share your memories.

Join Mansfield Funeral Home as we celebrate the live of Marvis...

Send flowers to the Brown family.