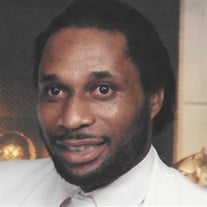 Mark Tracy Hornbuckle was born in Fort Worth, Texas to Evannia Thelma Brookins Hornbuckle and James (Jimmy) Louis Hornbuckle on October 1, 1960. Our Heavenly Father called Mark Tracy home to eternal rest on April 18, 2020. At an early age, Mark accepted Christ as His Savior and was baptized at Castleberry Baptist Church. He received his formal education in the Fort Worth Independent School District and graduated from Paul Laurence Dunbar High School in 1978. Mark Tracy began his 37 year career at Harris Hospital in the Housekeeping Department. As a result of his work ethic and preparation, Mark was promoted and worked the most of his years as a Histotechnician in the Laboratory Department. Mark Tracy was known for his serious work ethic! He was a hard-working man that was rarely sick or called in sick and was dedicated to Harris Hospital and his Lab team. Often, he worked two jobs, one for the bills and one for fun. When his daughter was old enough to work, he said, “We gotta find you a job. We all work around here.” When he met his infant grandson, Trey, for the first time, he told him “You need a job!” No matter what else changed – phone number, address, life, one thing always remained constant…Mark Tracy Hornbuckle would be at work. Mark married Joe Ann Lee on December 14, 1987 and during this union, they reared two children, Shanika (Shay) and Markese. He is survived by daughter, Shanika “Shay” Johnson and son, Markese Hornbuckle, sisters Alfreda Terrell (Leo), Mary A. Ferrell and Thelma Jones; grandson Sylvester Johnson, III. Mark was preceded in death by his parents, sister Wanda Gail Nickerson and brother Carl Redic. Mark Tracy was a loving father, grandfather, brother, uncle and friend who will be dearly missed. Tracy also leaves to cherish his memory a special friend, Jacqueline Brown; two special nieces, Rosalyn Redic and Yolanda Allison; a special nephew, Rev. Clayton Jones and god-daughter Michelle Tennyson. Others left with fond memories are a host of nieces, nephew, cousins, friends and his Harris Methodist Hospital work family. Mark Tracy Hornbuckle, you asked for so little, but gave so very much and will live forever in our hearts. And God shall wipe away all tears from their eyes; and there shall be no more death, neither sorrow, nor crying, neither shall there be any more pain: for the former things are passed away. Revelation 21:4 The visitation for Mark Tracy Hornbuckle will be available via Livestream at 12:00pm https://vimeo.com/411790684

The family of Mark Tracy Hornbuckle created this Life Tributes page to make it easy to share your memories.

Mark Tracy Hornbuckle was born in Fort Worth, Texas to Evannia...

Send flowers to the Hornbuckle family.