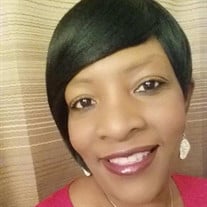 Marian Jenan Washington-Jones was born on December 8, 1959, to Zelma L. Washington in Oklahoma City, OK. Marian or Jenean as she is affectionately known to family, was raised in Idabel, OK until the age of six, when the entire family moved to Houston, TX where she attended Houston public schools and graduated from Kashmere High School in 1978. After high school she attended Sam Houston State University, North Texas State (University of North Texas, North Lake Community College. Marian accepted Christ at an early age and grew in faith as a young girl. She loved the Lord so much that most of our childhood was spent with her admonishing us for not doing what “thus said the Lord.” While during those days, we were not interested in listening to her; it turns out, she was right then and continues to be correct today. During her teenage years, Marian always loved to work and entered the workforce as an office aide for the apartment complex where we lived, The Gulf Coast Arms. Later she worked for McDonalds where her career began in the fast-food industry and progressed to management. Marian managed a variety of restaurants including Wyatt’s Cafeteria (Luby’s) where she had frequent contact with local Dallas Cowboy players and Dallas community leaders. She also managed Jack-in-the-Box, McDonald’s and Thirsty’s just to name a few. She loved the excitement of restaurant work where she encouraged young people and developed many lasting friendships. After marrying, Marian welcomed two beautiful daughters, Dionne and Rebekah. She was a devoted mother and worked tirelessly to make sure her daughters were happy and well cared for as they grew into beautiful young ladies. To that end, Marian decided to leave the restaurant industry for more reasonable work hours and began working at Value Options/Beacon Health Options where she was employed for 18 years. Due to her exceptional talent and expertise, she was recently promoted to Network Management Consultant for a newly developed children’s mobile crisis program, a program she was very passionate about. She and her supervisor, Frances Avery, were so excited about the promotion; they both cried. Marian loved the Lord and after several years of prodding, she became a devoted member at Mount Olive and has worked tirelessly to grow in the Word of God on a daily basis. After joining the Mount Olive family Marian joined the choir and became a Mount Olive Bible Institute student where she immediately began taking classes. She loved learning about the Lord so much that she usually took four to six classes each semester. Marian is preceded in death by her mother, Zelma L. Ryans; sister, Greta Welch; niece, Shauntell Jackson; and nephew, Isaiah Ray. Marian leaves to mourn and cherish her memories her daughters, Rebekah Jones and Dionne Jones both of Coppell, TX; her sisters Bernita Jackson, Arlington, TX; Freda Washington, Channelview, TX; and Brenda Cotton (Robert), Houston, TX; one brother, Stanford Washington (Linda), Friendswood, TX and a host of aunts, uncles, nieces, nephews and cousins. Those who plan to attend the Celebration of Life for Marian Jones are required to complete the funeral attendance registration form prior to Saturday's service. Once you complete the form you will receive a code that will be needed in order to be allowed in the church on Saturday. Masks are required Register by clicking on the link: https://mountolivebaptistchurcharlington.ccbchurch.com/goto/forms/449/responses/new

Marian Jenan Washington-Jones was born on December 8, 1959, to Zelma L. Washington in Oklahoma City, OK. Marian or Jenean as she is affectionately known to family, was raised in Idabel, OK until the age of six, when the entire family moved... View Obituary & Service Information

You must register to attend. Click the link: https://mountolivebaptistchurcharlington.ccbchurch.com/goto/forms/449/responses/new