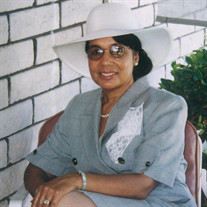 Mrs. Lue Wilder (Durio) Henry was born March 15, 1940, in Dayton, Texas to the parents of Joseph and Elizabeth Durio, the youngest of four girls: Olivia, Mary, and Jerry. Lue attended Dayton Public Schools and graduated from Colbert High School in 1958; she then pursued and obtained her LPN at San Antonio Technical and Vocational School in San Antonio, Texas, in September 1961. She joined Government Service in 1972 at Forbes AFB in Kansas, and later transferred to Luke AFB Hospital, where she served faithfully in several departments including Medical Labor & Delivery; ICU, and Family Practice retiring after 33 years of dedicated service. On October 27, 1962, she married the love of her life, MSgt. Lorenzo Henry USAF, Ret. in San Antonio, Texas, with whom she faithfully enjoyed life and an inseparable love for over 56 years. From this union, they were blessed with two daughters, Crystal and Jacqueline. Lue received numerous awards, certificates, and recognitions for her dedicated service to her profession and passion in the medical field. Lue cultivated a strong spiritual life as a devoted member of Our Lady Perpetual Help Catholic Church for 41 years. She modeled and shared with her daughters the value of loving God and living for Him. Lue enjoyed cooking, sewing, decorating and welcoming guests into her home. But it was her family that brought her the greatest joy. She loved them dearly and enjoyed talking to her sisters on the phone and making her annual visits back to Dayton, Texas in order to celebrate her father’s birthday. In addition, very few things could put a smile on Lue’s face bigger and brighter than her grandchildren. She would proudly show them off at every opportunity and would never end a phone call without asking, “How are my grandkids?” “Give them a kiss for me.” She leaves to cherish her loving memories: Her devoted husband, Lorenzo Henry; two daughters, Crystal (Charles) Van Riper, Phoenix, AZ, Jacqueline (Maurice) Pugh, Arlington, TX; one step daughter, Valeria Carroll, Los Angeles, CA; five grandchildren, Kendall, Maurice LT, Natalie, Shelby and Sydney; one sister, Olivia Dearbonne, Dayton, TX; one brother-in-law, Elmo Arceneaux, Raywood, TX; and many cousins, nieces and nephews. She was preceded in death by her parents, Joseph and Elizabeth Durio; sisters Jerry Maxie and Mary Lee Arceneaux.

The family of Mrs. Lue Wilder Henry created this Life Tributes page to make it easy to share your memories.

Send flowers to the Henry family.