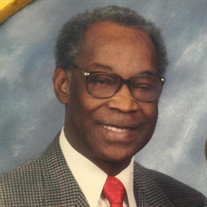 Reflections of A Life Well Lived Lorenza McDaniel was born on the 15th day of June, nineteen-hundred and thirty nine, in Camilla, Georgia, to Lillie Mae Taylor. He moved from Camilla, Georgia at an early age to live in Jersey City, New Jersey along with his twin sister Lillian. He attended Lincoln High School and participated in several activities including track & field. Lorenza was united in Holy Matrimony to Sarah T. McKnight on the twenty-sixth day of December, nineteen-hundred and sixty one. Lorenza loved to travel and had the opportunity to see the world while proudly serving in the United States Air Force for 28 years. He successfully achieved the highest enlisted rank of Chief Master Sergeant before retiring in 1987 from Carswell, Air Force Base in Fort Worth. After leaving the military, Lorenza worked at the U.S. Bureau of Engraving and Printing for 12 years before retiring in 2002. He was a member of the Amos T. Hall Masonic Lodge No.142 in Zweibrucken, Germany earning his 33rd degree. He was a faithful member of Zion Missionary Baptist Church in Fort Worth, Texas. He loved his family deeply and was very proud of his children, grandchildren, great grandchildren and wife. He was a true inspiration for all of us with his kind, loving spirit, wisdom and strong work ethic despite his many battles with illness. He leaves in God’s care: his daughter, Sharon Johnson (Lawrence): sons, Michael (Karen) and Timothy McDaniel (Chrischeryl); brother-in-law, Deacon Keith McKnight; sister-in-law, Vivian McKnight; grandsons, Andre Mathis, Marcus Mathis, Alexander McDaniel, Maxwell McDaniel; granddaughters, Valyncia McDaniel, Lacey McDaniel; great-granddaughter, Mia Mathis; great grandsons, Zamorian Hardeman and Jayin Mathis; special nephews, Kevin McKnight, Burnett McKnight, Leonard Stewart; special nieces, Sandra Johnson, Adrian McKnight, Kimberly McKnight, Rhonda and Wanda Stewart, and many loving cousins and other beloved family and friends. In addition to his mother he is also preceded in death by four brothers, Nathaniel Byrd, Henry Byrd and James and Frederick Gaines. He also had two sisters, Hattie Gittens and Lillian Stewart. LORENZA “CHIEF” MCDANIEL, a Wise and strong prayer filled man, committed husband, loving father and brother, a great son, a man who loved his family, and a true friend, will be definitely missed, but never forgotten as he is an inspiration to us all.

Reflections of A Life Well Lived Lorenza McDaniel was born on the 15th day of June, nineteen-hundred and thirty nine, in Camilla, Georgia, to Lillie Mae Taylor. He moved from Camilla, Georgia at an early age to live in Jersey City, New Jersey... View Obituary & Service Information

The family of Lorenza McDaniel created this Life Tributes page to make it easy to share your memories.

Reflections of A Life Well Lived
Lorenza McDaniel was born on...

Send flowers to the McDaniel family.