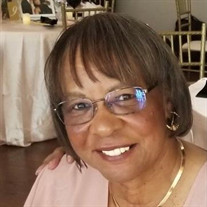 LINDA DARNELLA BRACEY CARTER was born on August 7, 1948, in Hoffman, North Carolina to Samuel Bracey, Jr. and Lillie W. Blue. On August 6, 2021, God stretched out His arms, told her job well done and brought her home to celebrate her 73rd birthday with Him. Linda obtained her childhood education at Beaver Dam Elementary School in Hoffman and graduated from Mineral Springs High School in Ellerbe, NC in 1967 where she was a star basketball player. She then attended North Carolina A&T State University in Greensboro, NC where she met and ultimately married, Jesse Carter. She did not complete her collegiate studies as his military service to the US Army had them relocate to Okinawa, Japan in 1970 where he was stationed for a little over a year. Upon returning to the United States, Linda began working for The Equitable in 1971. She worked there for 43 ½ years until retirement in 2015. Using her athletic talent from her younger years, Linda actively participated on the company’s Basketball, Softball and Bowling leagues. Taking the position of Regional Compliance Officer afforded Linda the chance to relocate to Texas in 2009 to be closer to her grandsons and their many activities. While working full time, Linda resumed her education at The American College, obtaining the designations of ChFC, CLU and FLMI, culminating in being awarded a Master of Science in Financial Services in May 1998. Linda LOVED to travel, was Tiger Woods’ #1 fan and in recent years, took a keen interest in politics becoming a Volunteer Deputy Registrar to channel her passion. She enjoyed connecting with friends and family through texts, calls (phone and Zoom) and social media. She rarely missed an opportunity to give a Happy Birthday shout out or Holiday Greeting. Linda was an amazing mother, a “favorite” mother-in-law, a loving and supportive G-Ma / GG-Ma, a protective sister, a faithful volunteer, a competitive golf buddy and a kind friend to many. Preceded in death by her niece, Tedi Harden, those left to cherish her memories forever are: Children: Brian Bernard Swann and Angie Porter (Horatio) Siblings: Lillie Bracey Booth and Kenneth Jackson (Marsha) Grandchildren: Darnell (Raven), David, Darien, Brianna and Kenneth Great-Grandchildren: Brandon, Kaliyah, Brooklyn and Miss Ava Nieces / Nephews: Terrence, Trevino, Treena, Tiffany and Jessica And a host of other relatives and dear friends. Memorial donations can be made in Linda’s name to her niece’s scholarship fund: Tedi (TD) Bracey Harden Memorial Scholarship Fund Sigma Gamma Rho Sorority, Inc. Delta Gamma Sigma Alumnae Chapter: C/O Dorothy Villines, 5487 Ivyridge Ct. Fayetteville, NC 28314

The family of Linda Darnella Bracey Carter created this Life Tributes page to make it easy to share your memories.

Send flowers to the Carter family.