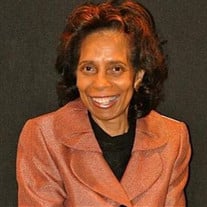 Laura Ann Bowe Randolph, 74, of DeSoto, TX died May 11, 2019 at Baptist, Scott, and White Hospital in Dallas, TX after a lengthy illness. Laura was born August 30, 1944 in Cotton Plant Arkansas to Justus Edward Bowe and Emma Jean Johnson. She received her early education in the Brinkley Public School System, which later she worked as an educator for 35 years. She married Leon Randolph on December 12, 1963. To this union 4 daughters were born. Laura was baptized into the Christian faith at an early age after her father led her to Christ. She was a faithful member of Brown Chapel Christian Methodist Episcopal Church in Brinkley for more than 50 years where she filled every office imaginable including secretary, Sunday school teacher, choir director, stewardess, missionary, prayer warrior, and Vacation Bible School director to name a few. After she moved to Texas to live with her daughters, she attended her daughters’ churches and was a member of The Village United Methodist Church prayer team and an honorary mother’s board member at St. James Church of God in Christ. She also attended the BSF (Bible Study Fellowship-an international Bible study group) which allowed her to continue her passion for Bible study. Laura taught at Partee Elementary School in Brinkley for over 35 years. It was during these years she helped mentor and shape the lives of countless teachers and students. She was adored and respected by both students and teachers and was known for her kind and gentle, yet firm demeanor. Many continue to testify of the positive impact and influence she made in their lives. After retirement from the Brinkley Public School System, she was asked to return briefly to serve as a consultant to assist in the development of other teachers. Laura truly believed that she was placed on this earth to serve the Lord. Firmly planted, she was the hands of Christ to many as she visited the sick and shut-in, picked up countless children to take to church, witnessed to those she knew and those she didn’t and praying fervently for others. As one of her favorite songs stated, she was a “soldier…in the Army of the Lord.” A true ambassador for the Kingdom of God, she was a mirror that reflected the image of Christ and a tangible representation of Jesus on earth. In her spare time she loved to read (especially children’s books), write poetry, study the word of God, pray for others and dance for the glory of the Lord. She absolutely loved, cherished and adored her family and embraced serving as the matriarch after the passing of her mother. She is preceded in death by her parents, her mother-in-law, one brother, Nathan Bowe, one sister, one sister-in-law, and her loving husband. Left to cherish her loving memories are four daughters: one god-daughter Rosalind Leon of Brinkley, AR; three brothers, six sisters, 18 Grandchildren, 11 great-grandchildren and a hosts of nephews, nieces, family and friends. “Well done, good and faithful servant.” Matt 25:21

The family of Mother Laura Ann Bowe Randolph created this Life Tributes page to make it easy to share your memories.

Send flowers to the Randolph family.