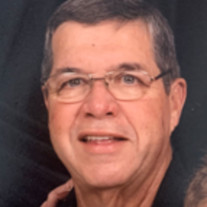 On Monday, January 27, 2020 @ 3:46 PM Larry Edward Doolin, a loving husband of 52 years, a father of 2, step-grandfather to 2, & a grandpa to 1, released his soul to the lord above. Larry was born on February 10, 1944 in Decatur Illinois to Leo Edward Doolin & Dorothy Lehman Doolin. He went on to excel as an All-State football player for MacArthur High School. He then later attended Austin Peay University where he was a member of the football team. On June 22, 1968 he married Margaret Elizabeth Baugher. They raised 2 sons Brian Edward Doolin & Jeffrey Aaron Doolin. He was a step-grandfather to Shelby Alyssa Marston & Madison Nicole Marston. On April 21, 2004 he became a grandpa…..his light…his dream was born…Garrett Landry Doolin. As a husband, he was in love with Margaret for over 51 years. Sharing life with her was a dream that he was able to live first hand. He worked hard to provide for Margaret….working for Norfolk & Southern Railroad for over 45 years until he retired in 2007. As a dad, he had a passion for devoting his time to his kids and others. He loved to be involved with his 2 son’s while they grew up. He would play catch with them whenever they asked….never wavering. He touched so many people’s lives while he asked for nothing in return. He never missed an event or practice or game. As a grandpa, once his grandson was born….he moved to Texas from Illinois to watch him grow and evolve into a young man. He was Garrett’s biggest fan….NEVER missing a practice or game. He would get up every morning and cook his grandson breakfast…cooking him breakfast so he could succeed in his day as a kid growing up. He then became an institution at Mansfield High School Football practices and games. Larry was preceded in death by his father Leo, his mother Dorothy, and his brother Joe. He is survived by his wife Margaret, 2 children Brian & Jeff & Jeff’s wife D’Anna, his 2 step-granddaughters Shelby & Madison, his grandson Garrett, his sister Sherry, brothers Jerry, Dick, & Steve. A Celebration of Life will be held on February 7, 2020 from 5:00 PM to 8:30 PM at the Mansfield Activity Center located in Mansfield TX, 76063. Flowers can be sent to the Mansfield Activity Center 106 S. Wisteria Ln Mansfield TX 76063. Larry, Dad, Grandpa….you now have the best seat in the house!! Love….All of US!!!

The family of Larry Edward Doolin created this Life Tributes page to make it easy to share your memories.

Send flowers to the Doolin family.