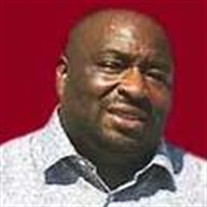 Larry DaMarcus Austin was born on August 2, 1976, the firstborn son to Larry and Cathy Austin in Lancaster, Texas. From an early age, Larry enjoyed working on cars with his father and spent much of his time watching wrestling. Larry attended Lancaster High School, where he played wide receiver on the varsity football team. After graduating from high school, Larry met and married the love of his life, Shomega Daniels. To this union, a daughter Jada, and son Jarius were born. He was a dutiful and devoted husband and father and was especially excited about the upcoming birth of their first grandchild, Jaleigha, this fall. For more than 22 years, he lived to make “Mega” and his children happy and the family enjoyed cheering on the kids in soccer and football and traveling together. In 1997, Larry began what would become a long successful profession in the trucking industry and eventually drove his own truck. His passion for cars, old and new, led to the launch of Austin Auto Express earlier this year. Buying and selling affordable cars was his business; however, seeing the joy he brought to his customers gave him a deep sense of service to the community. Larry and his family joined Hillcrest Baptist Church in Cedar Hill, Texas, where he was a firm believer in Jesus Christ. Loyal and dependable, Larry made many friends throughout his life. He was always willing to lend a helping hand or offer solid advice, all with that knowing smile. Larry was preceded in death by his grandparents, Timothy Calvin Austin, and Lee Rue and Mabel Culp. He will be loved forever by his best friend and wife Shomega Austin, daughter Jada Austin (Brandon Romero), son Jarius Austin, granddaughter Jaleigha Marie Romero (expected October 2021), parents Larry and Cathy Austin, brother Quental Austin (Menique Austin), grandmother Willie B. Austin, and a host of relatives and friends.

Larry DaMarcus Austin was born on August 2, 1976, the firstborn son to Larry and Cathy Austin in Lancaster, Texas. From an early age, Larry enjoyed working on cars with his father and spent much of his time watching wrestling. Larry attended... View Obituary & Service Information

Send flowers to the Austin family.