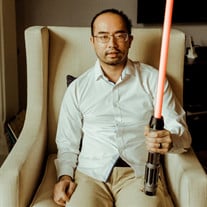 Our family sadly announces the passing of Khieu Hoang Nguyen on November 22, 2020. He was born on November 7, 1981 in Orange, California to Khai Nguyen and Thu Ha. At the age of 39, he passed away peacefully in Dallas, Texas surrounded by his loved ones. At a very young age, he moved to Arlington, Texas where he would later meet his soulmate, Susie Xuandao Nguyen. On April 17 of 1996, the two met each other through a friend. Susie, being the strong-willed person she is, asked him for his number and the rest was history. They would continue their friendship the next two years with him trying to impress her with his break dancing moves and mad video gaming skills. But if you ask Susie, it was his kindness, sense of humor and witty personality that really won her over. Khieu and Susie is what you would call high school sweethearts and their love stood the test of time. The couple would go on to date before getting married on June 27, 2009 building a strong and loving bond that cannot be broken. They were devoted to each other and raised two beautiful daughters, Kairi and Evelinh, whom are an epitome of their father. Whether it is their passion for video games, favorite foods, or the love for others you can see that he will always be a part of them. Along with his family lived his puffy fat cat, Cloud Strife, a name given as a homage to his favorite video game, Final Fantasy. Khieu was the definition of a family man and his family meant the world to him. His love for his sisters, Cong and Phi Nguyen, brother, Jonathan Nguyen, brother-in-laws, Baed Boulom and Cuong Hoang, and sister-in-law Amanda Ha was undeniable. He did not hesitate to be there when they needed him most. Even when a certain someone forgot to pick him up and he had to walk home in the rain, his love for his sisters never wavered. He was a loving and caring uncle to his many nephews (thanks to Cong and Baed) and only niece. His love for his wife and kids was unconditional and he would have done anything for them, even take on the fight against cancer so they wouldn’t have to. Along with spending every moment with his wife and daughters, he made it a priority to attend every family special occasion and spend Sundays with his dad, Khai, stepmom, Dung Trung, father-in-law Thanh Ha, and mother-in-law Roi Ha. For those blessed to know him knows he was committed and loyal to his family and friends, some of which he has known for more than 30 years. He was friendly in such a way where he would make you feel welcomed. He can carry on a conversation, whether it was with a taxi driver or someone he just met, like you’ve known each other for years. He was quick-witted with his jokes that made us laugh even during the most difficult times. Some would say he was sarcastic but those who knew him, know that it was just him making the best of a bad situation.  He was hardworking, dedicated, passionate, selfless and willing to give to others. With his selflessness, he did everything possible to bring positivity and comfort to all those around him during the remainder of his days. Khieu is survived by his wife Susie Xuandao Nguyen, his two daughters Kairi and Evelinh Nguyen, his father Khai Nguyen, mom Thu Ha, stepmom Dung Trung, sisters Cong and Phi Nguyen, brother Jonathan Nguyen, brother-in-laws Cuong Hoang and Baed Boulom, sister-in-law Amanda Ha, niece Avery Hoang, and nephews Jayden Hoang, Luke Boulom, Kyle Boulom, Josh Boulom, and Zane Boulom and cat Cloud Strife. You were taken from us too soon and will be forever missed but never forgotten. Thank you for all the love, laughter, support, and compassion you have given us throughout the years. “Goodbyes hurt the most when the story was not finished…”

Our family sadly announces the passing of Khieu Hoang Nguyen on November 22, 2020. He was born on November 7, 1981 in Orange, California to Khai Nguyen and Thu Ha. At the age of 39, he passed away peacefully in Dallas, Texas surrounded by his... View Obituary & Service Information

Our family sadly announces the passing of Khieu Hoang Nguyen...

Send flowers to the Nguyen family.