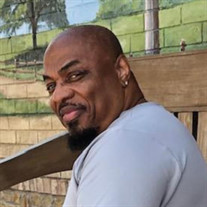 Remembering Kelvin E. Forrest Kelvin Eugene Forrest (Ski) was born October 18, 1956 in Chicago, Illinois to Emmitt Forrest Sr. and Mary Elizabeth Forrest. Kelvin grew up in the Inglewood and Dodge City areas of Chicago and later moved to the Beverly Hills area where he lived until he started his traveling adventures. He attended Elementary, Middle, and High School in Chicago. Kelvin joined the United States Marine Corps and was stationed in San Diego, CA where he served a short tenure and was honorably discharged. He later went with the Chicago Youth Conservation Corps to work in Yellowstone National Park in Wyoming. Kelvin was always a mover and a shaker and has lived in several cities throughout the United States including moving to no man’s land – Anchorage, Alaska where he lived for 13 years. While in Alaska, Ski worked side by side with his good friends James (Dino) Allen and Don Barnes in their own business, D&D Productions. These Promoters brought Black Entertainment to Anchorage for years, including starting the annual Juneteenth Festival. In 2004 he moved to Desoto, TX and finally made his home in Arlington, TX until his transition. Kelvin (Ski) is preceded in death by his father Emmitt Forrest, his mother Mary Forrest, his sister Patricia Barr and our goddaughter, Alexis Stubbs. To know Kelvin (Ski) was to truly love him. He never met a stranger, and if he did, they wouldn’t be one for long. His infectious laugh, love for others, talkative ways, and bright smile will truly be missed. One of the things that will be missed most about him is his willingness and love to teach The Word of The Most High. For many years, Kelvin (Ski) planted seeds and has brought many souls to the Kingdom. He had a passion for teaching the Word and would spend many hours studying, sharing, and teaching with those he knew and even those he did not know. If you knew Kelvin (Ski), he didn’t let anyone or anything get in the way of his studies, especially on the Sabbath. He learned the true name of the Our Heavenly Father many years ago and had no qualms about sharing the name of Yahuah and His son, our Messiah Yahusha. The many hours of research, continuous learning, and the knowledge that exuded from him caused others to seek and study the truth of Yahuah. Kelvin met the love of his life, his soulmate and six-bit change, Ms. Yolanda Moreland in May 2004. They were married on April 30, 2005 and with this union they became a blended family with a total of eight adult children. Kelvin leaves to cherish his memory, his loving wife, Yolanda Forrest. His children: Leslie (Ramone) Outerbridge of Chicago, IL; Jasmyne Taylor of Euless, TX; Juan Taylor of Griffith, IN; Dwanna Hines of Seattle WA; Amber Hawkins of Arlington, TX; LaTae McDowell of Sanford, FL; Shanae Anderson of Arlington, TX; and Albert Anderson of Arlington, TX. Eight precious grand-daughters: Ericka, Charlisa, Teaira, Taryn (Pooka), Olivia, Zaria, Joy, and Devaria. Fourteen doting grand-sons: Deshaan, Terrance, Fabien, Tyjuan, Jefferson, Joshua, Karmello, Taylor, Jeremiah, Caleb, Giovanni, Jace, Zaire, Judah, and Elijah. His Mother-in-law Evelina Moreland, Sister-in-law Barbara Moreland, Brother-in-laws Albert Moreland III, Eddie Moreland, and Johnnie Barr. A devoted big cousin, Denise (Dee-Dee) Green, a very special Brother and Sister Reginald and Merlinda Johnson, and a host of nieces, nephews, relatives, and dear friends. Trust in Yahuah with all your heart, And lean not on your own understanding; Know Him in all your ways, And He makes your paths straight. Do not be wise in your own eyes; Fear Yahuah and turn away from evil. It is healing to your navel, And moistening to your bones. Proverbs 3:5-8

Send flowers to the Forrest family.