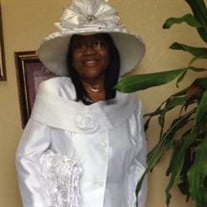 Let the Work I’ve Done, Speak for Me. Kat. On November 21,1952, Katherine entered the world as the last of seven children born to Riley and Keatlas Ewers. Kat, as she became known very early on, matriculated through public schools in Corpus Christi, Texas, graduating from Foy H. Moody High School in 1970. Later, she would complete business courses at Tarrant County Junior College. In 1969, Kat caught the eye of Johnny and they were joined in marriage. While in Corpus Christi, two children were born: Lyndon and Nicole. After moving to the Dallas/Fort Worth area, two more children were added: Andrina, and Shereah. Kathy. In 1973, she began a storied career at Southwestern Bell Telephone Company, or “The Phone Company” as it was more commonly known in the family. Kathy, as she became known to many, worked at The Phone Company for many years before retiring, the first time, to become an entrepreneur. Always known for her Sunday suits and hats, she opened Classic Dress Shop, first in her garage before expanding into two locations. After several years, she returned to work at The Phone Company, and worked for many years before retiring, a second time, from SBC, Communications. After retirement, she worked at William James Middle School as well as at O.D. Wyatt High School, as a Parent Liaison. Never too far away from The Phone Company, Kathy returned to AT&T as a contractor, training employees for many years before leaving the company one last time. Always wanting to add to her entrepreneurial repertoire, Kathy added travel agent to the many hats she wore in retirement, assisting family and friends in creating lasting memories on land, in the air, or at sea. Lady Kat. After acknowledging and accepting Christ as her savior, she began to work tirelessly in numerous roles and auxiliaries of the church, including the Choir, Purity Class, Sunday School, Young People Willing Workers (YPWW), and the Women’s Fellowship. In 2009, she became the First Lady of New Life Christian Fellowship Church of God in Christ, after her husband accepted the call to pastorship. Lady Kat, as she is often called, worked faithfully by her husband’s side, in the church, as leader of the Women’s Fellowship and in service as the Business Manager. Additionally, she worked alongside him in his role as Superintendent of the Pentecostal District, and as Chair of the First Ladies of the Texas North Central Jurisdiction. Always faithful to the work of the Lord, she was also a member of the Executive Committee of the Women’s Department, and a participant in the Jurisdiction’s Missionary Academy. Lady Kat served the church locally, but also regionally and nationally, traveling yearly to Memphis, Tennessee and St. Louis, Missouri, to attend district, regional, state, and national conventions, until her health no longer allowed her to safely do so. Serving the Lord and Ministry was a part of her daily life until God called her from labor to reward. On Thursday, January 14, 2021, Lady Kat answered the master’s call and peacefully transitioned from her earthly home to eternity, with Pastor Johnny by her side, as he had been for more than 50 years. She was preceded in death by her parents, Riley and Keatlas Ewers, sisters Erma McCarty and Shirley Ewers, brothers, Riley Ewers Jr., Arthur (Popsicle) Ewers, and Roy Ewers; her mother and father-in-law, known as Mama and Daddy Taylor. Those left to rejoice in a life well-lived: Her loving husband of 51 years, Johnny Alexander, children: Lyndon (Daphne), Nicole (Charletta), Andrina (Romalice), Shereah (Claude); grandchildren: Antonese (Charles), Kaylan (Shawntavious), Alyssa, Lyndon II, and Dylyn; great grandchildren: Zoie, Jaxen, Zander, Stephen, and Kasen; sisters: Elmer, Kathleen, Jeffry, Karen, and Kimberly, brothers: Donald and Tony, and a host of other relatives and friends.

Let the Work I&#8217;ve Done, Speak for Me. Kat. On November 21,1952, Katherine entered the world as the last of seven children born to Riley and Keatlas Ewers. Kat, as she became known very early on, matriculated through public schools in... View Obituary & Service Information

Join Mansfield Funeral Home as we celebrate the life of Lady Katherine via livestream: http://gcbcfw.org/

Let the Work I’ve Done, Speak for Me.

Send flowers to the Taylor family.