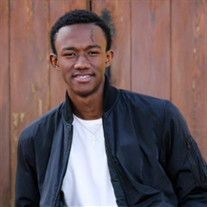 John Lee Jr. was born on April 21st 2000 in Atlanta, GA to Angelina (Gibbs) Essuman and Reshard Lee. Nicknamed “John John,” by his family, after John F. Kennedy Jr., he and his mother Angelina lived on the campus of GA Tech, while his mother completed her degree in Industrial Engineering. While living on campus at such a young age, John instantly became the center of attention with Angelina's friends, classmates, and anyone who knew him. John was such a lovable child that even Angelina's immediate friends became a center point in raising him alongside his mother. As a child growing up, John loved visiting his grandparents, who he called "Nana" and "Papa" in Ft. Lauderdale, Florida. John quickly developed a love for fishing wherever he could find a body of water. He also enjoyed playing cards, board games, dominos and any type of activity he could do with his family in addition to traveling the country and going on mother/son “date nights” with his mother. As John got older he developed a new passion for sports to coincide with his love for fishing. John's mother kept him active growing up with sports – including football, baseball, soccer, karate, and basketball. John soon developed a love for basketball, while continuing to be a standout student in school. He was recently inducted into both the National Honor Society and the National Society of High School Scholars. He boasted a 3.8 GPA in all AP Honors classes and was in the process of striving to beat his 1220 SAT score. In his spare time, John volunteered around the community and was especially involved in Mission Arlington and Brighter Tomorrow’s Domestic Violence Shelter. As John advanced in high school, he quickly set high goals for himself to one day be accepted into a high academic school for college, including Ivy League schools, while still trying to fulfill his dream to play college ball. John's work ethic increased as so did his grades as he became highly sought after both academically and athletically. John’s personality has always been infectious. In fact, in 4th grade during parent-teacher conferences, his teacher told his mother that the faculty at his elementary school affectionately called him “Lover Boy John” and that "all the boys wanted to be him and all the girls wanted to be with him." No matter where he went, no matter how long he knew someone, he always had the ability to make an impact on whoever came his way John will be remembered by his character, charismatic smile, and the unique charm he had around others. John is survived by his mother and father Angelina and Albert Essuman Jr, his biological father Reshard Lee (Erica), three brothers, Grandparents Kenneth Jr. and Linda Gibbs, Charlie and Ruthie Lee, Albert Sr. and Cecilia Essuman, Great Grandparents, a host of many Uncles, Aunts, Cousins and a countless amount of Friends.

John Lee Jr. was born on April 21st 2000 in Atlanta, GA to Angelina (Gibbs) Essuman and Reshard Lee. Nicknamed &#8220;John John,&#8221; by his family, after John F. Kennedy Jr., he and his mother Angelina lived on the campus of GA Tech, while... View Obituary & Service Information

The family of John Lee created this Life Tributes page to make it easy to share your memories.

Send flowers to the Lee family.