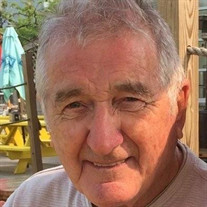 John "Jack" Johnston, 89, passed away on January 7th, 2021, in Mansfield, TX. He was a former resident of Indianapolis, IN and Naples, FL. John was born on January 27, 1931 in Liverpool, England, to Charles and Hannah Johnston. John was known as Jack to many of his friends and family as there were too many teammates named John on his soccer team playing for the Liverpool reserves as a youth player. John was an electrical engineer by trade and started his career working on submarines at the Liverpool docks while playing professional football in England back in the early 50's. John and his wife Mary emigrated from England to Canada and later became United States citizens and eventually settled and started their family in Indianapolis, IN in 1963. He ended his career as a Plant Manager at Ford Motor Company's Indianapolis, IN plant and retired after 33 years in 1990. John married Mary Lundstram in Liverpool, England on July 21st, 1956. The couple had 2 children, Kevan and Neil Johnston. John played professional football/soccer for Portmadog FC in the Welsh Premier League and Aldershot FC in the English League. He founded and coached his sons at Perry Soccer Club in Indianapolis winning several back-to-back state championships in the 1980's. He was also an avid soccer fan to his sons while they played for Purdue University and his loving granddaughter’s, Kaitlyn, Meegan and Erin Johnston during their club and collegiate playing days. John served both in the English Army, stationed in Aldershot, England and later in Egypt with the Core of Engineers. He is survived by Mary, his loving spouse of 65 years, his sons Kevan and Neil Johnston, granddaughters Kaitlyn, Meegan and Erin Johnston, Daughter-in-law Debbie Gallego, step-granddaughters Monica Elliott, Hillary Duncan, and Aubree Gallego. John is preceded in death by his parents, Hannah, and Charles Johnston.

John "Jack" Johnston, 89, passed away on January 7th, 2021, in Mansfield, TX. He was a former resident of Indianapolis, IN and Naples, FL. John was born on January 27, 1931 in Liverpool, England, to Charles and Hannah Johnston. John was known... View Obituary & Service Information

The family of John "Jack" Johnston created this Life Tributes page to make it easy to share your memories.

Send flowers to the Johnston family.