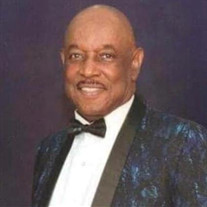 John D. Harrison, Jr. was born in Pascagoula, Mississippi to the parentage of John D. & Roberta Harrison, Sr. He was the only son and had four sisters who preceded him in death, June Slaughter, Edna Harrison, Deleah Johnson, and Janice Zinnimon. He was also preceded in death by his granddaughter, Anica Denise Harrison. John attended school in Pascagoula, MS and graduated from Carver High School. At Carver, he excelled in his academics and was known to be smart, intelligent, and quite witty. He was one of the top three in his high school graduating class, missing the Salutatorian title by half a point. Not only was he gifted in academics, he was very gifted in sports and mastered tennis, football, bowling, ping pong and more. Upon graduating from high school, John attended Alcorn State University. He received a full scholarship to Tuskegee University in Alabama but chose to attend Alcorn to assist his sister who was physically handicapped and attended Alcorn. While attending Alcorn, he met Winifred Cunningham, and to this union five children were born. John eventually moved his family to Dallas, TX where he continued to flourish and worked hard to provide for his family. John was a math teacher for a short while and later became a successful Account Manager for Federal Reserve Bank for many years. During this time, John received a Masters of Business Administration degree from Prairie View A&M University. He went on to become an entrepreneur in Real Estate and Mortgage lending until retirement. John moved his family to Dallas in 1969. They joined St. John Missionary Baptist Church and became dedicated and active members in the church and the community. John was a deacon at St. John and played an active and integral role in supporting church and leadership initiatives as a deacon. He was also an active member of the choir and a soloist. He had a high tenor range and enjoyed singing in the Men’s Choir. He was instrumental in developing the St. John Bowling League where he was President and a member for many years. In 1973, John and Winifred began laying the groundwork to form the Alcorn alumnus chapter for the Dallas area. The meetings started at their home and on December 15, 1974, the Dallas Chapter of the Alcorn Alumni Club of Dallas was chartered. In 1976, he was elected as the organization’s first President. The organization now has hundreds of active members who work to support and give back to their beloved HBCU, Alcorn State University. John distinguished himself in the community in many capacities. He was on the Board of Directors for Estell Village; Board of Directors for El Centro College Management; Chairman of the United Fund Drive; General and Team Captain for Big Brothers and Sisters Bowl-A-Thon; Life Member of Alcorn National Alumni Association; member of the NAACP; he was a Master Mason and a proud member of Omega Psi Phi Fraternity Inc. Additionally, he received numerous awards and recognition for his work and impact in the community. These distinguished awards include: recipient of the Pine Burr Award, Boy Scouts of America; named to Who’s Who Among Executives in the Banking Industry of the Southwest; recipient of Alcorn Alumni Club of DFW Founders Award; recipient of Alcorn State University National Alumni Association Professional Achievement Award in recognition of Outstanding Performance and Commitment to Excellence; received the Distinguished Alumni Award from the Alcorn Greater Dallas Alumni Chapter; and inducted into the Wall of Fame at Carver High School. John was a man of many talents. He was a mathematician and incorporated that gift into the carpentry skills he attained in high school. He was a gifted builder often traveling to Mississippi to do construction on his mother’s house and driving right back to Dallas to attend special events. He wanted to give his family the very best. Throughout his life he built a game room in the family home, constructed a two-story addition to the home, added a patio, and built furniture. He created the plans, mathematical formulas, and created what he envisioned. He instilled a great amount of pride and dignity in his children. He was a natural born leader, which is exemplified in the footprint of his life’s work and the legacy that he leaves for his children and grandchildren to carry on. Towards the end of his life’s journey he was placed in the care of his loving daughter, Demetris, who faithfully cared for him. John D. Harrison, Jr. is survived by his children, Demetris Harrison Green, Kertrina Harrison Dauway, Ontreia Harrison Williams (Gene), LaTara Thompkins (Donald), John D. Harrison, III; the mother of his children, Winifred C. Harrison; grandchildren, Astria Harrison, Brandon Harrison, Randi Harrison, Johnny L. Brantley, III, Toz Dauway, Jordan Thompkins, Amaya Thompkins, Jeremiah Thompkins, Nia Thompkins, Jelicia Harrison, Khalvin Harrison, Je’da Harrison, and Jessica Moore; two great grandsons, Damien Thomas and Donovan Montgomery; and a host of nieces, nephews, and cousins.

John D. Harrison, Jr. was born in Pascagoula, Mississippi to the parentage of John D. & Roberta Harrison, Sr. He was the only son and had four sisters who preceded him in death, June Slaughter, Edna Harrison, Deleah Johnson, and Janice Zinnimon.... View Obituary & Service Information

The family of John Douglas Harrison Jr. created this Life Tributes page to make it easy to share your memories.

John D. Harrison, Jr. was born in Pascagoula, Mississippi to...

Send flowers to the Harrison family.