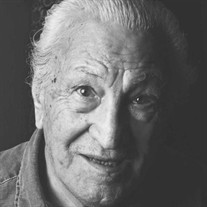 Obituary for John Aram Azad John Aram Azad passed away on February 28, 2021 in Ft Worth, Texas. He was 83 years old. He was born on October 3, 1937 in the village of Seydalab, near the city of Saveh, Iran to Sefatellah Mousavi and Maghboul Mousavi. His birth name was Seyed Ghafar Mousavi Khoshroo. He had many adventures growing up in farming communities in Iran. His brothers are Hassan Khoshroo and Hossein Khoshroo, and his sisters are Mahlaga (Mahine) Khoshroo, Toran Khoshroo (who died at age two) and Mahlaga Khoshroo (who died at age 3). He joined the Iranian army and later trained as a helicopter pilot on several U.S. bases including Lackland Air Force Base in San Antonio, Texas, Sheppard Air Force Base in Wichita Falls, Texas, and Nellis Air Force Base in Las Vegas, Nevada. When he was in Iran, he married Pari Shoolani. They had 4 children together: Ali (Al), Homayra, and a twin boy and girl who passed away soon after birth. He later married Patricia “Pat” Elia in New Jersey on June 29, 1969, and then Elizabeth “Betty” Azad in approximately 1985. He was a proud grandfather to Erica Azad and David Azad. He had many jobs over the years including autobody mechanic, shoe salesman, and magazine store clerk. He was also an Amway distributor in the 1970s, and then owned oriental rug stores at different times. He became a U.S. citizen and enjoyed the various freedoms provided in this country so much so that he legally changed his last name to Azad, which means “free.” Many extended family members were able to come to the U.S. as a result of his efforts and support. Over the years, he lived in several states in the country including New Jersey, Texas, Arkansas, Arizona, Utah and California. He enjoyed traveling and was able to go to many countries including India, Japan, England, Germany, Luxemburg, Mexico, Thailand, Turkey, and United Arab Emirates. He spoke English, Farsi, and Turkish. He was able to get scuba diving certified and enjoyed diving while he was able to do so. He had a stroke on Sept 11, 2001, and watched the tragic events of 9/11 unfold from his hospital room. He recovered well, but the stroke affected his cognitive abilities for the rest of his life. He is preceded in death by his father, Sefatellah Mousavi, his mother, Maghboul Mousavi, his sister, Toran Khoshroo, his sister, Mahlaga Khoshroo, his first wife, Pari Shoolani, his 2nd wife, Patricia “Pat” Elia Azad, and his 3rd wife, Elizabeth “Betty” Azad. We all love you and will miss you, John Azad – our father, brother, grandfather, husband, uncle, friend. We will miss your generosity & big heart, your knack for starting a conversation with complete strangers, your desire to keep in touch with old friends, your one-liners that were unknowingly deep and philosophical, your passion and excitement for the things you enjoyed, and yes – we’ll even miss your impulsiveness. We look forward to the time when we can all reunite with you and those in the family who’ve passed on. We know you’ll continue looking out for our family. We long for the days when we can all love each other and feel loved. Thank you for everything you did for us.

Obituary for John Aram Azad John Aram Azad passed away on February 28, 2021 in Ft Worth, Texas. He was 83 years old. He was born on October 3, 1937 in the village of Seydalab, near the city of Saveh, Iran to Sefatellah Mousavi and Maghboul... View Obituary & Service Information

The family of John Aram Azad created this Life Tributes page to make it easy to share your memories.

Send flowers to the Azad family.