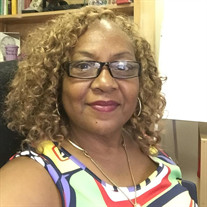 Ms. Jessica Blackmon Jones, daughter of the late Jessie Blackmon and Helen Walker was born on May 14, 1948 in Fairfield, AL. At an early age she professed her faith in Jesus Christ and joined Macedonia Missionary Baptist Church where she was a dedicated member. In 1966, she graduated from Western Olin High School in Birmingham, AL where she was a majorette in the marching band. She went on to graduate from Bishop College in Dallas, TX with a BS degree in Social Work in 1970. While at Bishop College, she was a member of the marching band, playing the flute. She was also initiated into Delta Kappa Chapter of Alpha Kappa Alpha Sorority, Incorporated in 1967. She later joined the Alpha Xi Omega Chapter in Dallas, TX. She married Harold Jones, Sr. and to this union Harold A. Jones, Jr. was born. She later received her Master’s in Social Work from East Texas State University and continued to profess her faith in Jesus Christ as a member of St. Luke Community United Methodist Church, and most recently, The Village United Methodist Church. Ms. Jones claim to fame was her cooking. Whether it was a home cooked meal, homemade cake, or peach cobbler, requests for her cooking came from family, friends, and sometimes strangers. In addition to cooking, she traveled abroad, tried her hand at painting, loved to swing out and line dance, and took cake decorating classes. All of which she wanted to pass down her love of life to her granddaughters. As a result of her generous spirit and pleasant personality, she was loved by many. Her Christian life was as beautiful as the cakes she made, and her influence will forever remain in the lives of all who knew her. She quietly departed this life on Friday, December 22, 2017 at Methodist Dallas Medical Center in Dallas, TX. She was preceded in death by her father Jessie Blackmon, stepfather R. D. Walker, mother Helen Walker (Finley), brother Beverly Blackmon, and sister Patricia Carson (Walker). Her beautiful life will forever be cherished in the lives of her son: Harold Jones, Jr. and daughter-in-law, Deidre Jones (Bell) of Dallas, TX; granddaughters Jalen Jones and Kailyn Jones of Dallas, TX; sisters Betty Hall (Blackmon) of Detroit, MI and Rosalynn Walker of Birmingham, AL; and a host of devoted nieces, nephews, cousins and friends.

Ms. Jessica Blackmon Jones, daughter of the late Jessie Blackmon and Helen Walker was born on May 14, 1948 in Fairfield, AL. At an early age she professed her faith in Jesus Christ and joined Macedonia Missionary Baptist Church where she was... View Obituary & Service Information

The family of Jessica Jones created this Life Tributes page to make it easy to share your memories.