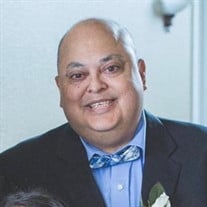 Join Mansfield Funeral Home as we celebrate the life of Jesse Heiman Cancino II: https://vimeo.com/event/235596 Jesse Heiman Cancino II was born on January 27, 1966 and went home to the Lord on August 18, 2020. Jesse was born in Newport Rhode Island. Jesse graduated in 1984 from Lewisville High School, in Lewisville, Texas. He was married for 22 years to the love of his life Melba 'Boy' Puente on November 22, 1997 and they lived and raised their family in Grand Prairie Texas. Jesse loved Melba like no other and was always thankful for the love and support she gave him; she could make him laugh and smile like no other. Jesse was involved in all his children's activities and Andy, Christion and Laryssa were his greatest gifts. He spent countless hours supporting and involving himself in their lives and bragged about every accomplishment his children succeeded in. Jesse was blessed with three beautiful granddaughter's Madeline "Maddy", Delilah 'Baby D', and Bella and they went everywhere with their PoPo. Jesse never missed any event when it came to his girls and he showered them with the love of the best PoPo ever. Jesse was the founder of The Cancino Sr Foundation originally created in memory of his nephew Alex for his brave fight with cancer. Jesse would help everyone whenever he could - he had a servants heart and touched the lives of so many with his generosity and fund raising. Jesse loved all things sports and he especially loved golfing with any family member that would go. He was an avid Dallas Cowboys fan and loved watching the games with his Mom, and he love all things OU - Boomer! Jesse is preceded in death by his Dad, Jesse Cancino, Sr., and his nephew, Alex Puente, Perfecto Puente Sr. And Perfecto Puente Jr. Jesse is survived by his wife Melba, his children, Andy Gonzales, Christion Gonzales and Laryssa and David Lerma, and his three granddaughter's, Madelyn, Delilah and Bella, his mother Oliva Cancino, his sisters and brothers, Jessica Cancino, Jennifer and Jimmy Wynne, Joseph and Lena Cancino, and Jason Cancino, his mother-in-law Mrs. Puente , his sister in laws Nancy Puente, Armando and Jana Puente, Esther and Don Grimaldo, numerous aunts and uncles, nephews and nieces, and great nieces and nephews who he showered with love and attended as many events that he could for all of them too. Jesse was taken too soon, and we are solely thankful that he is in the arms of the Lord and has gained his Angel Wings. Melba said it best "You are free my love to do the things you wanted to do." Jesse is someone that everyone will remember, and we were blessed with the many memories of love and support that he has given to all of us throughout the years. He was one the greats and will be greatly missed.

The family of Jesse Heiman Cancino II created this Life Tributes page to make it easy to share your memories.

Join Mansfield Funeral Home as we celebrate the life of Jesse...

Send flowers to the Cancino family.