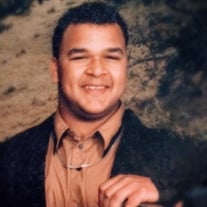 Jamison Craig Washington was born to the union of George Washington and Joetta Little on October 7, 1975 in Decatur, Illinois. His father, who preceded him in death in 2012, named him Jamison Craig Washington I (the first and the only). Jamison was known for his soft heart, unselfish nature, and being lover of all God’s creations. Jamison’s bold and courageous personality allowed him to greet others with a contagious deep-dimpled smile while also gifting the world with his gut wrenching down from the belly laugh. He always opened his heart to hear the concerns of others and possessed the compassion to help anyone in need. Jamison was patient with people, giving them his undivided attention, and while he may not have agreed, Jamison was willing to hear their heart. He stood boldly in his own shoes and although Jamison may have appeared unapproachable to some, he would give the shirt off his back, the last in his pocket, and his generous love to show you someone still cares. Jamison was known to rescue wounded animals, take in strays, and treat them with unimaginably gentle kindness. Jamison attended school in the Carrollton-Farmers Branch area where he played football was often recognized as an “A” Honor Roll student. He loved school and the Teachers and ladies loved him. Jamison embraced all cultures of people. He wasn’t afraid to approach adversity, apologize with a humble heart, or begin a new adventure with renewed expectations. Jamison leaves to cherish his memory: his devoted Fiancé: Alicia Dewitt, his loving Mother: Joetta Little, one loving and caring sister: Amy Forté of Mansfield, TX, two brothers: Ryan (Shannon) Hand of Houston, TX, and George “Deuce” (Stacie) Walker of Sacramento, CA, two nieces: Sydnie and Chesna, and four nephews: Isaiah, Jeremiah, Michael and Carson. As well as a host of aunts, uncles, cousins, and friends. Jamison’s nephew Elijah preceded him in death earlier this year.

The family of Jamison Craig Washington I created this Life Tributes page to make it easy to share your memories.

Jamison Craig Washington was born to the union of George Washington...

Send flowers to the Washington family.