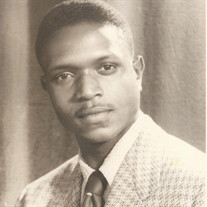 James Ellis Jones, Jr. was born in Fort Worth, Texas on July 18, 1930 to James Ellis and Jetrenee Parks Jones. He had a happy childhood in the Riverside neighborhood of Fort Worth with his sisters Bessie, Mamie, Erma, Brenda, Barbara and Renee, and also many other family members. He attended Riverside Elementary School and I. M. Terrell High School graduating with a High School diploma in 1948. After High School, he attended Prairie View A&M University in Prairie View, Texas and Lincoln University in Independence, Missouri, graduating from Lincoln with a Bachelor of Science in Mathematics in 1954. One day while attending Lincoln, he noticed an attractive young lady hurrying to and from classes. He determined to meet and get to know her. This young lady was Earnestine Vaughan, who became the love of his life. He courted Earnestine by singing with his quartet outside her dorm room. They were married in September 1954. September was known as the family month, since their marriage and the birth of their two children, Carol and James all occurred during that month. After graduation, he served in the U. S. Army in Germany. After military service, he and his family lived in Kansas City, Missouri and Oakland California, before finally moving in 1962 to the Washington, D. C. area, in Prince George County, Maryland. He joined the Department of Health and Human Services of the District of Columbia government, and became a counselor to troubled young men in need of guidance. He retired in 1992 after 30 years of service. In 1993, he and his wife Earnestine returned to Texas to live in retirement. They were members of Cornerstone Baptist Church, participating in the Senior Bible Study group under the direction of Reverend Cornelius. His interests during his active years included tennis, bowling and boating on Chesapeake Bay with his family and friends. He also played the trumpet, like his father and Grandfather, winning a state-wide award while in high school. He especially loved any activity involving family. He was known as a people person, a man that family can turn to for advice, support and love. He leaves his wife Earnestine, his children Carol and James, his living sisters Barbara Caraway (Philip) and Brenda Faggett (Bobby), and many nephews, nieces and cousins. He passed away to his reward on March 9, 2018 at his home in Arlington Texas. He has touched many lives, and his presence and advice will live on in his family and with people who knew and worked with him.

James Ellis Jones, Jr. was born in Fort Worth, Texas on July 18, 1930 to James Ellis and Jetrenee Parks Jones. He had a happy childhood in the Riverside neighborhood of Fort Worth with his sisters Bessie, Mamie, Erma, Brenda, Barbara and Renee,... View Obituary & Service Information

The family of James Ellis Jones Jr. created this Life Tributes page to make it easy to share your memories.

James Ellis Jones, Jr. was born in Fort Worth, Texas on July...