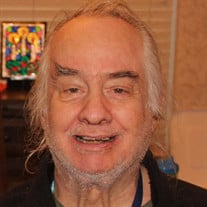 Hunsdon Reginald Cary was born in Manhattan Borough, New York City on 6 Dec, 1940. He passed away in his sleep on Sunday, 22 Sep, 2019 in Arlington, TX. He spent his early years in upstate New York starting school at the Garrison Union Free School and then attending Trinity Pawling boarding school for high school, just like his father and two uncles. By the time he graduated in 1959, he was involved in multiple activities, including choir, yearbook, newspaper, French club, tennis, track, wrestling and lettering in football. Hunsdon joined the Navy and completed basic training in 1963. He served four years with time on two submarine tours of the Mediterranean. Later, in Texas, he joined the Army National Guard Reserves and spent several additional years serving with our nation’s armed forces. Hunsdon was always seeking education and opportunities to learn. He had several degrees including a Bachelor of Arts, with a major in Botany, from UC Santa Barbara in 1974, a MBA from BYU in 1978 and finally a DC from Parker College of Chiropractic in 1991. He worked in several different career fields over the course of his lifetime and was always reading and striving to learn more. He especially enjoyed documentaries or science & nature shows to understand more about the world around him. He was fascinated by astronomy and studies of religion. He is predeceased by his parents, Reginald “Scoop” Lord Cary and Bonnie Belle Youngquist. He is survived by his brother and sister, Peter Tristram Cary and Judith Ann Cary. He is also survived by his former spouse and mother of his five children, Lynn Elliott Davis. His children, Jennifer Lynn and Derek Pfeifer, with their daughters Kayla and Ashley. Bonnie Beatrice and Tyson Finley, with their children Ren, Kelton, Tiernan and Declan. Rory Mathias Cary, Anne “Faythe” Elizabeth Cary. Rose Noelle and Dante Hedge, with their daughter Lily. Hunsdon met Katherine Davis in 2013, and they were blessed to join their lives in a commitment ceremony in June of 2014. In lieu of flowers, the family asks for donations to the American Diabetes Association or the ASPCA.

Hunsdon Reginald Cary was born in Manhattan Borough, New York City on 6 Dec, 1940. He passed away in his sleep on Sunday, 22 Sep, 2019 in Arlington, TX. He spent his early years in upstate New York starting school at the Garrison Union Free... View Obituary & Service Information

The family of Hunsdon R. Cary created this Life Tributes page to make it easy to share your memories.

Send flowers to the Cary family.