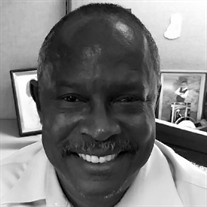 Trust in the Lord with all thine heart and lean not unto thine own understanding. In all thy ways acknowledge him, and he shall direct thy paths. – Proverbs 3:5-6 Henry Lee Pippins was born to the late Pearlie Pippins Bennett and Lathon “Bill” Jones in Madison County, Mississippi, on January 2, 1952, and passed away peacefully on April 28, 2017. He was preceded in death by his mother, father, stepfather, Charlie Bennett, and his brothers, Dalray and Earl Bennett. Henry, known as “Pip” by those who knew and loved him, accepted Christ at an early age and joined China Grove AME Church. He later moved his membership to St. Luke "Community" United Methodist Church in Dallas, Texas, before finding his church home at The Village United Methodist Church in DeSoto, Texas, under the pastorage of Pastor Derek Jacobs. He graduated from Rosa Scott High School in 1970. Henry then attended Tougaloo College and graduated in 1974 with a Bachelor of Science degree in Mathematics and Physics. He continued his education at Jackson State University and received his Master of Science degree in Computer Science. He and Kathy were united in Holy Matrimony on May 8, 1976. During his lifetime, Henry was employed for over twenty years with Business Information Technology (BIT) until he branched out and started his own consulting business. In doing so, he built a working relationship with Parkland Hospital which culminated into a permanent position as a senior IT analyst from 2006 to April 2017. Henry loved his career in computer science. If he had a problem, he would dream of the solution, “I figured out the problem.” Henry was an amazing man, loving and kind-hearted. He loved traveling, entertaining, grilling, playing tennis and golf. The Dallas Cowboys was his favorite team to watch and cheer for relentlessly. But most of all, he loved being with his grandchildren who affectionately called him “Paw Paw". He leaves to cherish his memories: his wife, Kathy; children: Justin of Fort Worth, Texas, Jamaal of Lancaster, Texas, Hillery of Duncanville, Texas, and Darius (Tamara) of San Antonio, Texas; grandchildren, Anaya, Lathan, Jordyn, and Ayden; sisters: Christine (James) Carey of Muskegon, Michigan, and Catherine (Joseph) Perry of Madison, Mississippi; six brothers: Christopher (Johnnie) Jones of Madison, Mississippi, Willie (Ann) Jones of Morton, Mississippi, Charles Bennett, Michael (Diane) Bennett of Jackson, Mississippi, Victor Bennett of Madison, Mississippi, and James (Sonya) Bennett of Jackson, Mississippi; one aunt, Willie Mae (Keith) Powell of Madison, Mississippi; six brothers-in-law: Donald (Barbara) Williams of El Sobrante, California, Dr. Terry (Natalie) Williams of New York, Michael Williams of Jackson, Mississippi, Elmer T. Williams of Baton Rouge, Louisiana, and Greg (Valarie) Williams of Jackson, Mississippi; two sisters-in-law: Sandra (Donald) Smith of Missouri City, Texas, and Jennifer McDougal of Duncanville, Texas; godson, Ramon Hodges of Mansfield, Texas; special daughter, Crystal Lewis; and a host of nieces, nephews, and other relatives.

Trust in the Lord with all thine heart and lean not unto thine own understanding. In all thy ways acknowledge him, and he shall direct thy paths. &#8211; Proverbs 3:5-6 Henry Lee Pippins was born to the late Pearlie Pippins Bennett and Lathon... View Obituary & Service Information

The family of Henry Lee Pippins created this Life Tributes page to make it easy to share your memories.

Trust in the Lord with all thine heart and lean not unto thine...

Send flowers to the Pippins family.