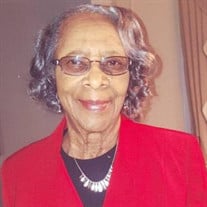 HADIE MAE WEAVER was born in Ripley Mississippi to the union of Claude Lenzy Gunn and Hermie Adams Gunn on August 29, 1930. She was the youngest of six children. In 1938, the family moved from Ripley, MS to Palestine, AR. She attended Hawkins school in Palestine, AR On December 3, 1946 (at the age of 16) Hadie was united in holy matrimony to Arbie Lee Weaver in Palestine, AR. To this union six children were born, two died shortly after birth. She retired from Reltoc Manufacturing Company in Forrest City, AR. She was a member of Hedge Providence Baptist Church in Palestine, AR for many years under the leadership of Rev. N. L. Therkield with her last pastor there being Rev. Napoleon Grace. She served as church clerk, a member of the church choir and mother of the church. Hedge Providence closed after Rev. Grace accepted the position as pastor of Pilgram Rest Baptist Church in Forrest City, AR. After Hedge Providence closed Hadie joined Antioch Baptist Church in Palestine, AR under the leadership of Rev. Robert Cowan and later Rev. Duckworth She was a member of the choir and a mother of the church. Hadie loved to can veggies (from her garden) and fruits. She was a great cook with her specials being her corn bread dressing and desserts – especially her sweet potato pies. She also made many meals for her churches’ events. She was always available to render assistance to the seniors and the sick and shut-ins in her community as well as other town/cities near her resident in any way she could. She was a God-fearing lady who raised her children in the church. While in Little Rock, AR with her two daughters from December 2013 to July 2015, she attended St. John’s Baptist Church where Rev. C. Dennis Edwards is the pastor. After relocating to Texas in July 2015 to live her oldest daughter, she attended Mt. Olive Baptist Church in Arlington, TX where Rev. J.P. Thompson is the pastor. After COVID-19, she would watch Mt. Olive Baptist Church Services’ Live Stream. Hadie departed this life on February 6, 2022 in Keller, Texas. Her parent; Husband, Arbie Weaver, Sr; siblings - (Thelma Oakley, Charles Gunn, Vera Pendleton, Richard Gunn, and Olive Gunn); three grandchildren; Jermonie Weaver, Demon Willis and Angela Weaver all preceded her in death. She leaves to cherish her fond memories one son, Arbie Weaver, Jr. (Anne) of St. Louis, MO; three daughters, SueVeria Dickens (Nate) of North Richland Hills, TX, Girthal Blackmon (David), Linda Anderson (Melvin); Seven grandchildren (Craig Weaver (whom she raised), Bradrick Turner, Marlin Anderson, Nicole Anderson Friendly, Tracy Dickens, Sonya Blackmon Pierce and Marcus Blackmon; Eighteen great grands, four great-great grands, nieces, nephews, other relatives, friends and her Antioch Baptist Church family in Palestine, AR. Arrangement entrusted to Mansfield Funeral Home – 1556 Heritage Parkway, Mansfield, TX 76063 A Celebration of Life memorial service will be held in Forrest City, Arkansas at a later date.

HADIE MAE WEAVER was born in Ripley Mississippi to the union of Claude Lenzy Gunn and Hermie Adams Gunn on August 29, 1930. She was the youngest of six children. In 1938, the family moved from Ripley, MS to Palestine, AR. She attended Hawkins... View Obituary & Service Information

The family of Hadie Mae Weaver created this Life Tributes page to make it easy to share your memories.

HADIE MAE WEAVER was born in Ripley Mississippi to the union...

Send flowers to the Weaver family.