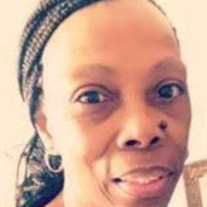 Gwendolyn Allean Butts, 66, was born September 23, 1954 and went on to meet her Lord and Savior after a long and faithful journey on June 27, 2021. Gwen as many know her by was a caring mother, grandmother, sister, and friend to everyone she met. She was born to the late Otis Butts and Barbara Shephard in Camden, Arkansas later moved to Lamesa, Texas where she graduated from Lamesa High School. After high school, Gwen went on to college to chase her dreams of becoming a licensed nurse. She spent majority of her life flourishing and touching lives in the nursing field. She worked at skilled nursing facilities, state mental hospitals, hospice, child protective services, nursing homes and in many other fields. But her passion was always sharing the Love and Word of God. She was a devoted and loyal servant of God, who spent many years actively involved in the church until her illness. She has served on the hospitality committee - visiting the sick and shut in, organized health fairs and was a Sunday school teacher to just name a few things. She was also known for her great cooking which she put to use for many holiday church celebrations. Gwen was preceded in death by her parents, siblings: Sherron (Louie) Scott, Nebraska Butts and Otis Butts; and grandchild Jayla Williams. Gwen is survived by four children and their families: Corey Lewis, Ray Lewis, Janice (Marvin) Green, and Cheri (Ben) Warner. Grandchildren: Jamela Lewis, Marcus Asberry, Deziray Lewis, Malik Lewis, Jaylin Williams, Sherron Majors, Olivia Majors, Rayanne Lewis, Malachi Lewis, Kyrie Lewis, Bennie Warner, Hezekiah Lewis and Torrance Lillie. Great-Grandchildren: Marie Asberry, Mia Asberry, Jayce Edwards, Jayden Edwards and Kysin Williams. Siblings: Mary King, Shay Lamb, Tony Johnson, Michael Johnson and Chris Johnson. Family Companion: Emil Bart; and a host of other relatives and friends.

Gwendolyn Allean Butts, 66, was born September 23, 1954 and went on to meet her Lord and Savior after a long and faithful journey on June 27, 2021. Gwen as many know her by was a caring mother, grandmother, sister, and friend to everyone she... View Obituary & Service Information

The family of Missionary Gwendolyn Lewis created this Life Tributes page to make it easy to share your memories.

Send flowers to the Lewis family.